Meet Papi the chihuahua: an Instagram-famous dog with over 12,000 followers 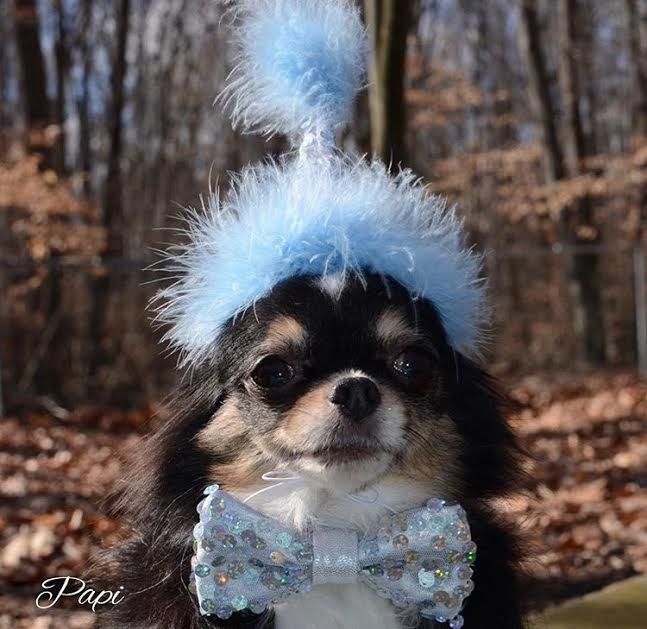 Papi, an Instagram-famous chihuahua is owned by senior Ella Howe

Many teenagers in today’s society have had dreams of being Instagram famous at some point.  It is near impossible to get over 100 likes in a minute, receive free items in exchange for publicity, or to be recognizable wherever you go.  While this seems like a fantasy to many adolescents today, it is a reality to one special animal: Papi, the cute Chihuahua.

Papi, a long coated Chihuahua who weighs a mere six pounds, is taking the social media world by storm. This adorable dog has nearly 12,000 Instagram followers, and is gaining more and more each day.  In order to figure out how this rise to fame occurred, talking to his owners was a must.

Senior and dog enthusiast Eleanor Howe is the creator and mastermind behind the Papi account (@papi_the_cute_chihuahua).  Howe adopted Papi in the fourth grade, and immediately knew he was going to be a star. “We had other dogs at the time we adopted him,” said Howe, “and although he was a small puppy surrounded by large older dogs, he always stood his ground.”

By the time Howe became involved with social media she discovered that there was an entire world dedicated to cute animals. She began to commit hours in her day to photographing Papi and reaching out to other popular animal accounts. With the help of her aunt Barbara Getter, Howe easily opened an account for Papi, although she did not know what doors it would open for her.

Within two years of the initial opening of the account, Papi had become well known among thousands of Instagramers.  With new followers coming in everyday, he was receiving all sorts of positive reinforcement from his friends and followers alike. Along with sweet comments from people and animal accounts, Papi began receiving direct messages about advertising clothing and toys for dogs. “It was a really fun process and I really didn’t think it would become anything more than cute pictures of my dog,” explained Howe, “but when people began to send items to Papi I knew he was becoming something huge.”

As Papi’s fame grew, people began reaching out to him to advertise their belongings. “People send him all sorts of things,” said Getter, “hats, bowties, onesies, you name it, he has it. All for free, too!” Papi had reached celebrity Instagram status. All he had to do was wear the items sent to him and post a photo to his booming Instagram account. Papi was officially a star.

Despite the great deal of followers that Papi has, it’s nothing compared to some other pet accounts on Instagram. “Papi is not as famous as some of his dog friends,” stated Getter, “12,000 followers may seem like a lot, but it isn’t anywhere near as many as some of his other Instagram friends.”

Getter is referring to Papi’s best friend, Bruce Wayne (yes, like Batman).  Bruce Wayne is similar to Papi in many ways; he has witty Instagram captions, receives clothes in the mail in exchange for promotions, and is also a chihuahua.  However, Mr. Wayne has 56,300 instagram followers, a huge step up from Papi.

Even though Bruce Wayne has more followers than Papi, they are still the best of friends, according to Howe.  “They message each other through direct message all the time, and promote each other’s pages. It’s really cute,” she stated, “and of course Papi has one thing that Bruce has never had: an imposter.”

During the month of January, Getter noticed a direct message from one of Papi’s fans informing Papi of an imposter account under another username. “Papi and I were distraught,” Getter exclaimed, “we had no idea why anyone would steal our pictures, or pretend to be us!”  According to both Howe and Getter, this account would take photos from Papi’s account and post them as if they were her own.

“It was a messy situation; however Papi’s loyal fans came to the rescue,” stated Howe. “Soon everyone was reporting the account and commenting on the pictures she posted.”  About two weeks after Papi found out about the account, it was shut down, thanks to Papi’s devoted fans.

Some of Papi’s biggest friends are students at Northern Valley Old Tappan. Kirsten Murphy, senior, claimed to be Papi’s “number one fan” according to multiple comments on his Instagram photos.  When asked about her love for Papi, Murphy responded by saying “I love Papi, there’s just nothing not to love.  He is adorable and sweet! I would literally die for him.” Of course, claiming to be Papi’s number one fan was a hard feat to live up to, but Murphy showed her dedication to the 8-year-old Chihuahua through loving Instagram comments, and constant promotion on her own Instagram.

Of course, Murphy is not Papi’s only fan.  However, her love for him is just one pure example of how many students at NVOT and other animal accounts around the world love Papi.  “We look forward to seeing how much his fans love him and it really puts everyone in a good mood knowing that Papi can make everyone so happy,” explained Howe.

Truly, Howe and Getter’s love for Papi has helped them turn him into an international sensation and also form a closer bond as aunt and niece.  “We always pick out photos together, and whenever Ella is around she partakes in helping us with the photo shoot,” explained Getter. “It is nice to be able to have something to bond with my niece over.”

In modern day America it is difficult to run an Instagram account, let alone one dedicated to a pet.  After asking Howe and Getter for an explanation as to why they keep doing it, the answer was clear.

“For me, it was something to look forward to at the end of the day,” gushed Getter. “I love to read all the nice comments left on Papi’s posts, and I also really enjoy communicating with other animal Instagram accounts.  I love having this connection with my niece, and I am excited to see where Papi’s fame will take him next.”