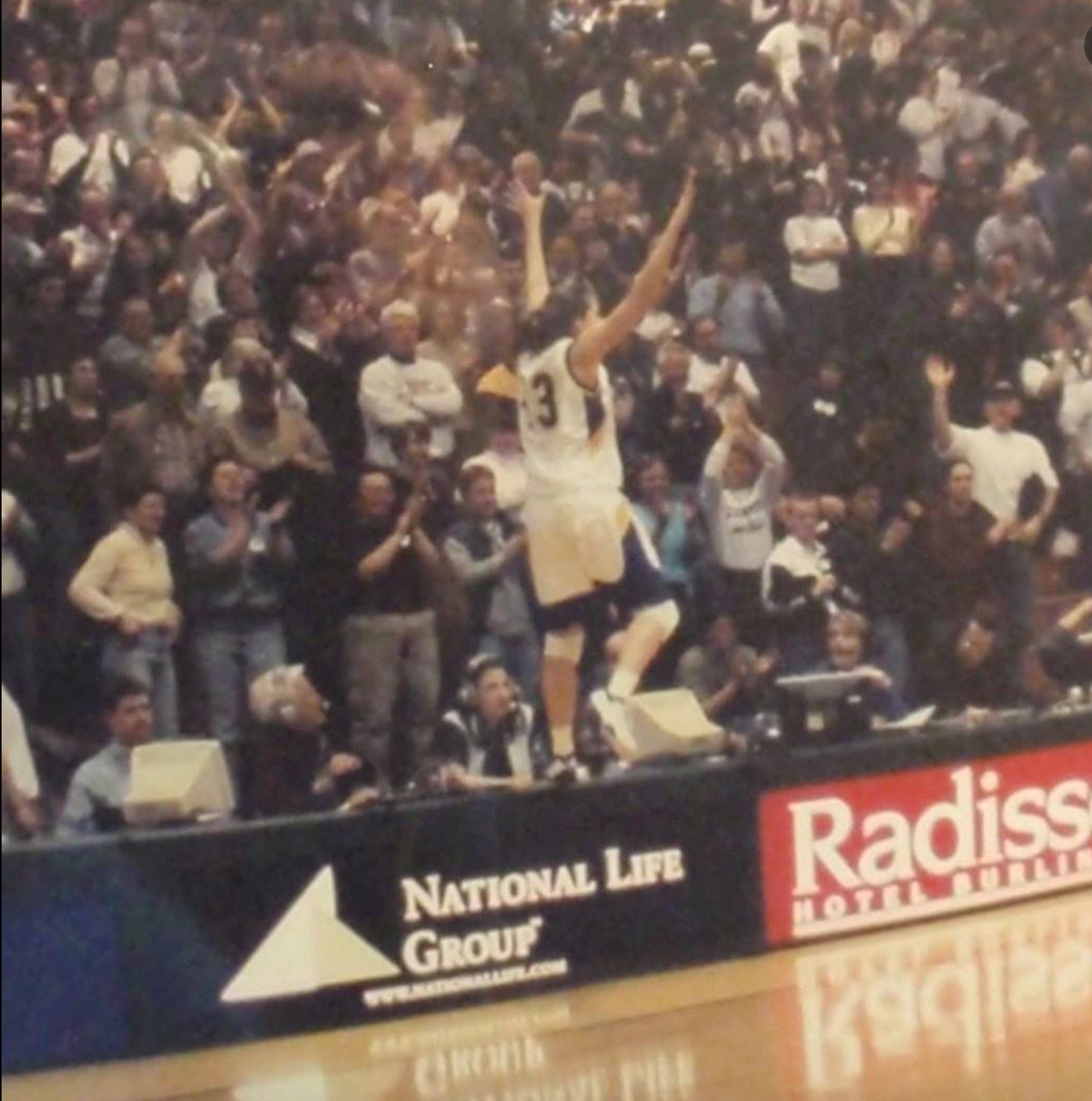 After the buzzer rang, Steffner sprinted to the scorer’s table. She said, “It felt necessary to celebrate in that fashion and make sure the 95% of the fans who were screaming at us, remembered us.” (Courtesy of Lindsay Steffner)

After the buzzer rang, Steffner sprinted to the scorer’s table. She said, “It felt necessary to celebrate in that fashion and make sure the 95% of the fans who were screaming at us, remembered us.”

Be (Del)Aware of the Mother Hen

When asked about her favorite March Madness moment, Lindsay Steffner did not hesitate: The University of Delaware womens basketball team’s run in 2001 to make the NCAA tournament. It was hands down her favorite moment and her own Cinderella story. Before coaching girls basketball and teaching phys ed, Steffner played the sport herself. She was a Division I athlete at Delaware from 1998-2002 and helped lead the Blue Hens to their first tournament appearance in program history. Watching this year’s UD women’s team return to the tournament brought back familiar memories for Steffner–of the experience and of the bond she and her teammates shared.

In 2001, UD was ranked as the number one seed in their conference, but come the championship game of the American East Conference Tournament, the Blue Hens found themselves down 16 points to the University of Vermont in the final quarter.  Although most of the crowd of 3,500 was cheering against them, they battled it out to the very end. The Blue Hens needed this win to receive an automatic bid to the Big Dance and they weren’t about to give up. Steffner recalls, “at one point Vermont started celebrating too early which fired me and my teammates up.”

The team decided they were not going to go down without a fight and their team identity helped them the rest of the game. While many men’s NCAA teams face chemistry issues with players leaving after a year or two to play professionally, women’s teams stay intact, and the Blue Hens were no exception. Steffner’s teammate Carrie Timmins said, “We pushed each other to improve because each of us were fiery competitors at our hearts and we liked to laugh and be silly.” This very combination of sisterhood and determination is what helped the Blue Hens stay in the game heading into that final quarter.

The shift in momentum allowed the team to fight back and tie the game, sending it to sudden death. “Once the ball was tipped in overtime we scored first and never looked back,” Steffner said.

As the starting shooting guard, Steffner put up clutch shots on multiple possessions, expanding the team’s lead even further. With points on the board and hope in their hearts, the Blue Hens had newfound energy.

As soon as that final buzzer sounded, the girls tackled each other at half court in celebration —

this was not just a team win, this was a family memory.”

Steffner said that she is proud of how her fellow teammates “stayed with it and showed our resiliency.”

This victory solidified the Blue Hens’ position in the NCAA tournament. In the first round, they went on to play North Carolina State where their season would come to an end. Steffner returned the next year for her fourth and final season, leading the team in a new role as Delaware’s captain.

Despite having gone in their own directions, the team keeps in touch daily through their team group chat. It seems as though the spirit of this Delaware team will never disappear. “They are my sisters,” Steffner said. “Those relationships last a lifetime.”