NVOT reflects on its favorite March Madness moments of all time. 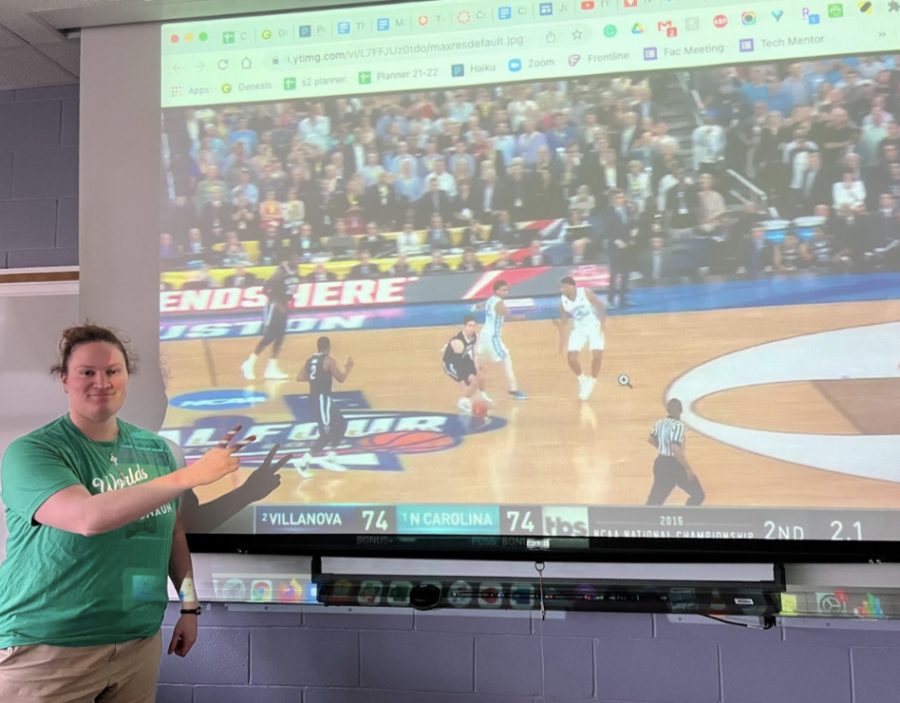 What makes March Madness so unique is the combination of anticipation, excitement, and unpredictability. So with the conclusion of the 2022 tournament, The Lance took to the hallways and classrooms of NVOT to find out teachers’ and students’ most memorable moments from past tournaments.

Kris Jenkins buzzer-beater in the 2016 championship

One of the most iconic shots in college basketball history. Hoopers across the globe dream about moments like this. Tied game, clock running down, playing for not just the single win, but for the Division I National Championship.

Before we dive into this moment, let’s run it back. Villanova’s path to the championship was earned, not given. The two seeded Nova edged UNC Asheville in the first round, then later went on to beat Iowa and Miami to send their program to the Elite Eight for the first time since 2009. From there the Wildcats rolled over Oklahoma in the Final Four, nearly doubling the score of their opponents, 95 to 51. Their dominance proved that they didn’t just come to the dance to make noise, they had their sights on hardware. And the only way to bring that hardware back to PA: beat the top-ranked powerhouse, the UNC Tarheels.

The first half of the national championship was a back and forth fight for the lead with neither school extending a lead larger than five. In the final minutes of the championship, UNC guard Marcus Paige drains an off-balanced, double-clutched shot, well behind the three-point line. 74 to 74. 4.7 seconds left, Villanova ball. Nova guard Ryan Arcidiacono receives the inbound pass and everyone in the arena and everyone watching at home knows what’s coming. A buzzer-beater was imminent. With 1.5 seconds left in the game, Arcidiacono handed the ball to Jenkins, and the ball sunk through the net as the buzzer rang. Villanova won the big dance storybook style.

Heading into the 2018 NCAA Division I Men’s Basketball Tournament, Loyola Chicago was a forgettable mid-major. They hadn’t qualified for the tournament from 1985 until 2018, and many had never even heard of the Ramblers.

In their first game of the tournament, they were a No. 11 seed facing a strong Miami team. The Hurricanes kept control of the game, but Loyola managed to keep it close enough that with 1.6 seconds on the clock, Small Forward Donte Ingram took the go-ahead three and sank the shot, knocking off the No. 6 seed.

Their Cinderella story immediately captivated fans, and anecdotes about their chaplain, Sister Jean, warmed the hearts of all spectators. The 99-year-old attended every single game during their regular season, and the tournament was no exception. Before every tip-off, the team would gather around her wheelchair, participating in prayer led by the elderly sweetheart. Players cited her enthusiasm and support as the reason for their continued success, and thus the story of Sister Jean became the story of the 2018 tournament.

Back on the court, the Ramblers continued to face tough matchups. Their second-round game against No. 3 seed Tennessee was their toughest opponent yet, with the world expecting their Cinderella story to come to a quick end.  Yet, the Ramblers continued their underdog run with a 63 to 62 thrilling win. For their second consecutive game winner, shooting guard Clayton Custer was now the hero. An incredible bounce saved Loyola from elimination and knocked off a dark horse tournament favorite.

The run continued, and the Ramblers now faced No.7 Nevada, who were enjoying a Cinderella run themselves. The twin Martin brothers from Nevada, however, were no match for the Ramblers, as Loyola eventually handled the Wolf Pack 69 to 68. The love for Sister Jean and the Ramblers was in full effect at this point, and the underdogs quickly became fan favorites of the tournament. Now in the Elite Eight, Loyola Chicago was pitted against Kansas State. The two teams were already making tournament history, posting the highest sum of seeds for an Elite Eight matchup at 20. This pressure was not enough to worry the Ramblers though, as they easily defeated the K-State Wildcats 78 to 62.

Eventually, all good things must come to an end, as was the case of the 2018 Loyola Chicago Ramblers. In the Final Four, they fell to the Michigan Wolverines 69 to 57, but Loyola Chicago has since been the collegiate basketball underdog story of the decade.

Ranked as the No. 1 seed, Duke was projected to win the entire tournament in a blowout fashion. A line-up with five future NBA players and Zion Williamson, the Blue Devils were bound to go far in the tournament. Posting one of the most impressive collegiate seasons of all time, and riding the insane hype of his high school mixtape, Williamson destroyed records (and shoes) leading up to the tournament.

However, No. 2 seed Michigan State also posted a deep line-up of three future NBA players. A mostly senior class led this team to the Elite Eight, and they had no plans of letting this year get away from them. In regular season play, the team posted a 16 win, four loss record in the Big Ten, also winning the conference tournament. This experience led them to three decisive wins over opponents, and with an average victory margin of 16 points across their first three tournament games, the Spartans looked deadly.

The stage was set for the game of the tournament. MSU wanted to be the giant killers to ruin Duke’s historic freshman trio, but the Blue Devils wanted to avoid the upset.

The game tipped off, and the first half was as close as the previous two Duke tournament games. It was a true back-and-forth matchup, and each Duke basket was matched by a Michigan State response. The cycle of scoring continued with a four point differential at half time. RJ Barrett threes were responded to by Cassius Stanley pick and rolls, and neither team seemed to have an answer for their opponent’s scheme. With the Spartans controlling the pace of the game, Williamson’s high flying dunks just couldn’t energize the Blue Devils.

With 30 seconds left, a clutch three-pointer from Michigan’s Kenny Goin gave a 68 to 66 lead to the Spartans. The Blue Devils inbounded for a last-minute, but the Spartans fouled RJ Barrett, not giving Duke a chance to take the lead with a three. Barrett missed one of his free throws, leaving the score 68 to 67. Duke called a timeout, needing a miracle turnover for another chance to win the game.

With the timeout over, both teams lined up for the crucial inbound pass that would decide the fate of both of these championship-driven programs. As the game winded down to the final seconds, it would be Cassius Winston who caught the inbound pass and ran out the clock with a final score of 68 to 67. Mission complete.