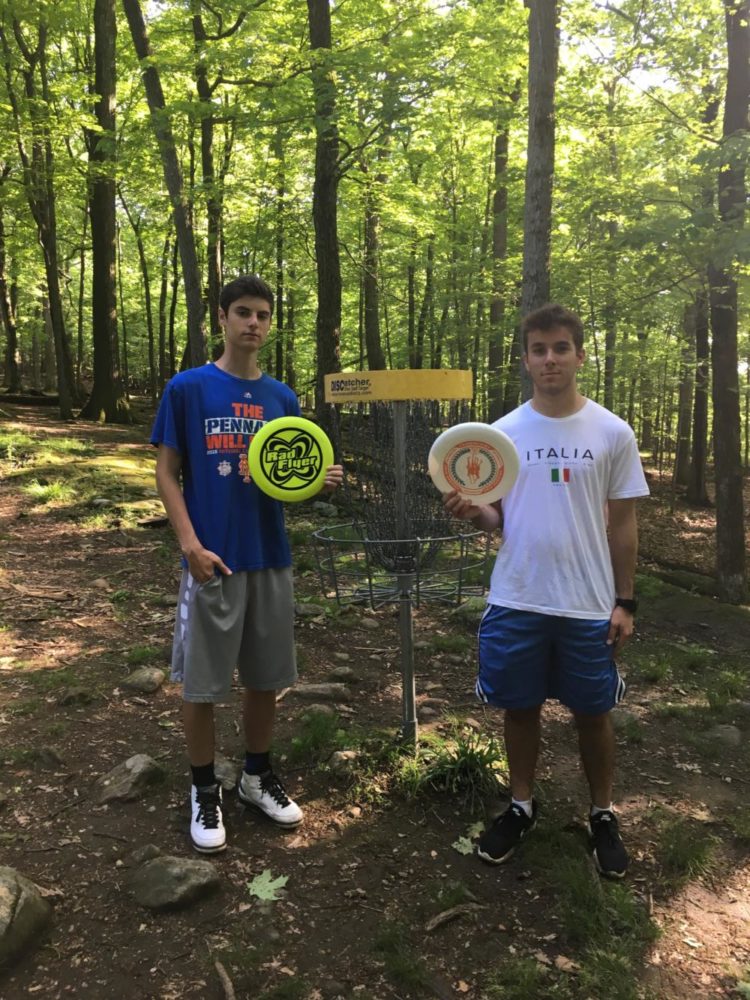 SUCCESS: Ackerman and DePhillips after successfully completing a hole.

If you have ever played or watched regular golf, you can easily understand the basics of disc golf. Just replace the golf ball with a flying disc. However, there was one distinction the editors and I did not foresee.

Once we arrived  we were immediately skeptical. There was no golf course in sight.  Instead, we saw  the ski slopes that many families frequent throughout the winter months. However, being at least three months out of season, the slopes were desolate. It seemed as if everyone left the lodges as they were. The woods loomed.

As we walked toward the main lodge, our hopes of playing seemed dead in the water. We did not see any disc golf in sight, and there was no one who could point us in the correct direction. As we walked passed the lodges looking for a map or a person, we found an open door that led to an office.

While we waited for the woman inside to finish her phone conversation, she pointed us in the direction of the course. Little did we realize that disc golf was actually a sport played in the woods rather than on an open field . The 18-hole course trekked up to the top of the mountain and cruised back down.

After the first hole, I was expecting only a couple more tacky holes, but I was proven quite wrong. In fact, one hole even snaked the ski slope. Being beginners, we played the beginner course. Nevertheless, I fully intend to visit the course again and play the more difficult levels.

At the end of the day, after a nearly lost disc, an encounter with a garter snake that I swear could have been a cobra, and several unfortunate disc rolls and bounces, managing editor Ryan Dephillips and I tied (76-76). Editor-in-chief Jason Ackerman lagged behind with a disappointing 82. While Ackerman may have finished strong, his start was atrocious, and he was unable to fight back.

Reflecting on the day, Ackerman said the experience “was certainly unique.” He also promised that, if he returned, the outcome would be different.

If we return, we can learn from our mistakes from our first time. For example, we need to bring smaller discs. According to the one other guy we saw (who was shirtless, middle aged, and playing disc golf on a Tuesday afternoon), if we are serious about the sport, we should go to Dick’s Sporting Goods and invest in a smaller disc.

Key to the game was anticipating the bounces and rolls of the disc. Because the game is on the side of a wooded mountain, the disc often rolls down hills or bumps into trees. These rolls and bumps can determine the outcome of the game. In our game, DePhillips lost the lead on the last hole after he nearly lost his disc (it collided and ricocheted off a mammoth of an oak tree).

Ultimately, we all agreed to revisit the park. Not only was the game surprising, but it was fun and certainly worth the thirty-minute hike out to Campgaw Mountain Reservation.