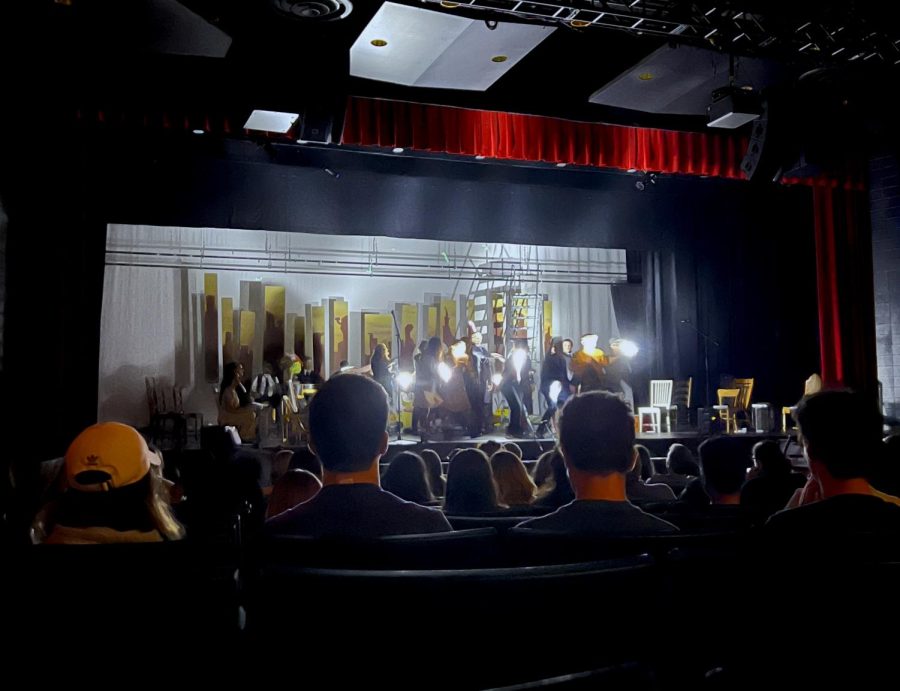 The cast of Urinetown performing "The Cop Song"

The theater department came back from Bikini Bottom and arrived at Urinetown. In addition to the annual fall play and spring musical, the team produced a third show on Friday, June 3: a semi-staged, concert performance of the Tony Award-winning musical, Urinetown.

Urinetown is a dystopian story that imagines a world where, due to a water shortage, citizens must pay to pee. Anyone who disobeys this rule is sent to the mystifying Urinetown. The show depicts the struggles of the poor and the ease of the rich, as well as the star-crossed love story of poor Bobby Strong, played by senior Matthew Lindley, and rich Hope Cladwell, played by senior Brooke Wilkins.

Urinetown’s production was very different from the highly anticipated, big-budget spring musical. The Spongebob Musical was directed by Susan Van Buskirk, produced by Amy Wilcox, and choreographed by Caitlin Ort. Urinetown, however, was completely student-led.

Students were in charge of every aspect of the production–all the jobs they were usually “on the opposite ends of,” as senior Brooke Wilkins described. Adapting to the change wasn’t seamless, but, according to Wilkins, the strong foundation they built from past productions allowed them to “really listen to each other, no matter what grade we were in, since we were all really focused on getting this up and running.”

Urinetown was an opportunity for these aspiring actors to experience different parts of theater. Sophomore Roman Gatti, who played Robby the Stockfish and choreographed four musical numbers, said, “I had the privilege to help choreograph this show, and it really opened up the gates to even a new career path I never considered.”

Sophomores Gia Brockman and Lilliana Mangano choreographed the musical number “Don’t Be The Bunny” together—a rare opportunity for underclassmen. With this opportunity, the duo wanted to make it special: “Going into choreographing this dance, I wanted to be able to tell a story, which we had the freedom to do,” said Brockman.

Urinetown’s production not only set a precedent for the Golden Arts department but also served as an opportunity to tighten the bonds between them. “We all influenced each other, trusted each other, and worked really hard during our alone times,” said Wilkins.

The department will return with The Laramie Project as the annual fall play, and Dirty Rotten Scoundrels as the annual spring musical in the 2022-2023 school year.