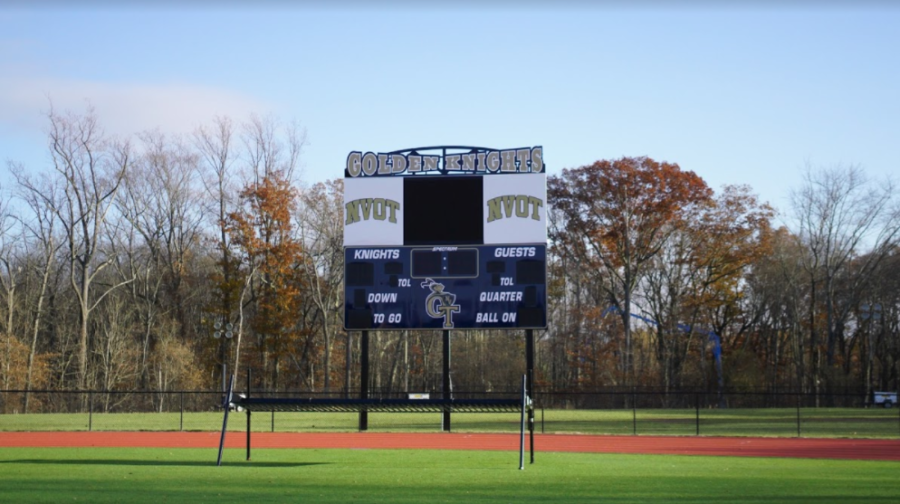 Installed earlier this year, the new scoreboard on the turf upgraded to LED lights and includes the new video screen, often referred by students as the “jumbotron.” So far, the video screen has been used to display pictures of seniors on the different fall teams as well as different messages throughout games.

Controlled by the Branding and Social Media Club, the video screen has several features. As club advisor Frank Rotella puts it, the screen “has the capability to do really anything.” In addition to pictures of seniors on Senior Night, the scoreboard can also put up messages such as “goal” or “touchdown.” Recently, the club has created an introduction video for the football team with drone shots and quick editing.

According to Athletic Director Mr. Tom Kaechele, a new scoreboard had been on the agenda for a while. In fact, the Athletic Office had raised over $20,000 for this effort. He said, “While the other scoreboards in the school have updated to LED lighting, the turf scoreboard was still on the older lighting. Updating to the new LEDs is important because the other lights need to be constantly replaced and are expensive.”

Once installed, Rotella and the club were initially unsure what to do with the screen. Rotella said, “We were asked to take on its responsibilities just at beginning of the year.” Since then, Rotella went to Northern Valley Regional High School at Demarest where they had this same board installed earlier. Rotella “met with the students who run it” and was able to “learn a lot.” Similarly, after its installation, they learned more from the manual and the instructions.

Now, a committee of students from the club operate the screen. According to Rotella, this effort is led by senior Basil Tweedy and president of the Branding and Social Media Club junior Chris Bazela. Junior Joe Matteo and sophomore Devin Policastro have also helped out.

Although the display is in its first stages, Tweedy is really excited about the screen. After all, Tweedy joined the club after hearing about this new display. Rotella said, “I was given some names from the art teachers, and Basil was interested and approached me about helping out.”

The first time the club used the video screen was at a field hockey game. They realized they still needed to figure out how the software and programing worked. Tweedy said, “That first game was difficult, but we were able to figure it out. There is no doubt we will continue to make it better and cooler with every game.”

Bazela shares the same feelings and is optimistic for next year as well. He said, “I am really looking forward to next year. By then, I will have a year’s worth of experience from operating it, so we should be able to do some really cool things.”

However, as a senior, Tweedy wants to make these goals become a reality right now. In the immediate future, Tweedy hopes to eventually have highlights of the first half to show during halftime. Because the club is also responsible for sound, Tweedy hopes to somehow incorporate that aspect with the screen. For him, the options and opportunities seem “endless.”

Meanwhile, the student response has been mixed. According to senior Kyle Shine, the new scoreboard is intriguing. He said, “I liked to think I have a lot of school spirit and go to the games. I definitely noticed the video screen, and I think it’s pretty creative.”

On the other hand, according to senior football player Jack Dippolito, the new scoreboard does not make an impact when he is on the field. But, he said, “when he goes to other games like soccer, I notice the pictures of the seniors.”

When he is off the field, Dippolito is slightly disappointed by the rumors of a potential “jumbotron.” Dippolito said, “When I first heard about it, I was expecting a massive display like at a stadium. It was a little disappointing to get that small screen. I am looking forward to it when they display actual highlights like a professional game.”

According to Kaechele, a potential bigger screen is not off the table. Kaechele looks at the two white Old Tappan logos on either side of the screen as an area to expand. He said, “We are looking into expanding into those white side panels. However, like everything, that expansion is expensive. I guess it is one of those things that, once we bought it, we wish it was bigger.”

Still, Kaechele said he is looking forward to the different things that Rotella and the student committee are able to do. He said, “We are the only district in the county with this kind of scoreboard. I think that is pretty impressive.”