HQ is taking NVOT by storm 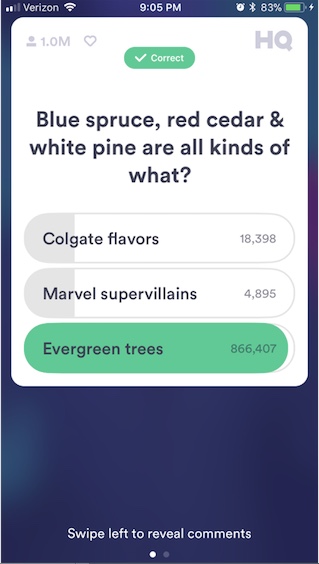 HQ is an interactive trivia game that goes live at 3:00 pm and 9:00 pm everyday. It was released in August of 2017. With 12 to 15 questions per game and three multiple-choice options per question, hundreds of thousands (and sometimes over a million) of people join the game and play to win. Those who do not answer each question within 10 seconds, or choose an incorrect answer, are out for the remainder of the game. There is a set amount of prize money per game that has ranged from $2,000 to $18,000 and it gets divided among the winners at the end of the game. If the prize is $2,500 and there are 20 winners, each winner would receive $125 as a prize.

The most popular host for the app is Scott Rogowsky (aka Host Malone, aka Quiz Khalifa, aka Edward Quizzerhands, aka Quizzie McGuire, aka Quiz Daddy, aka ‘Quiz With Me and Get Some Money’).

After school, winter sports teams have been seen playing in groups before going to practice or games. Freshman Alexandra Meeks said, “It’s fun. I learn facts I didn’t know about the world. At [track] practice, we play as a team and discuss the answers. It helps us win easier.”

Many other students play HQ from home. Sophomore Rida Qureshi said she loves the game.  ”It gives you an incentive to learn new things,” Qureshi added, “and that’s why it has done better than the trivia crack craze- it’s live competition.” She also said that it “encourages learning” because of “the fact that everyone else plays it. It’s mob mentality at its finest.”

History teacher Thomas Walsh, who started playing HQ during Christmas break, commented, “I really like that the questions are difficult, and cheating in the game by Googling answers is next to impossible. If anything, it encourages people to play in groups, which is nice.”

From an alternate perspective however, there are also some students who are not very fond of the trend. Sophomore Juliana Saric describes it as “stupid” and a “horrible game.” After playing with her brother and helping him answer questions, she stated that, “between every question felt like an eternity. She even had some comments about Rogowsky, saying “it’s a pretty fun game concept, but the host takes away all [the] fun from the game.”

Juniors Jules Ramil and Liv Leon agree that, “we both think that the announcers are annoying, especially Scott.” Ramil added, “I like it, but it’s frustrating.” Leon agreed, saying how she doesn’t like it “because it lags a lot.”

The lagging issue has been the main problem with the game. Some players are not even able to answer the questions due to the app lagging, and then they get kicked out of the game.

Walsh also commented, “For me, the lag is the biggest flaw of the game. As soon as I log on and there is a lag, it drives me crazy and I just quit out of it.”

HQ has become a world-wide phenomenon that, despite the mixed reviews, grows in players every game. Will you be playing?