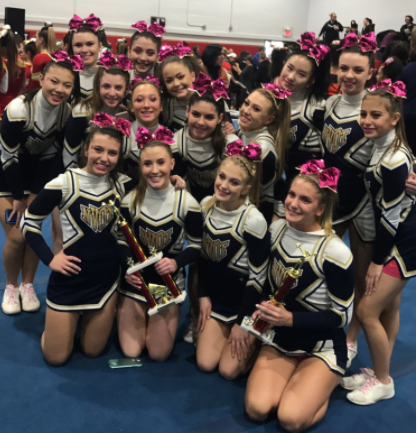 The Varsity Competition Cheer team has won the Big North Championship five years in a row and are currently undefeated this season. The latest meet took place on Sunday, January 21st at Emerson High School, where the team won overall championship and continued their winning streak.

This most recent competition in Emerson was successful for the team. The secret to their success is teamwork. “We all work together and motivate each other,” senior Alivia Weinstein explained. “We win together or lose together.”

But for the last five years and counting, the team has only won together, including the first competition of this year’s season. “Every stunt hit and most tumbling also did too,” sophomore Madison Simone explained. “We won first in our category and proceeded to winning grand champs, which is first overall.”

The varsity cheerleading competition team has been practicing every Monday, Wednesday, and Thursday, and has been taking tumbling classes outside of school in addition to practices. Tumbling consists of cheerleaders jumping, flipping, and twisting to perform synchronized stunts. Practices usually last between an hour to an hour and a half, where the team trains to perfect each performance. “Practices definitely pay off,” Simone said, “I was nowhere near as strong of a flyer that I am today.”

During the week, the team also participates in mini-meets, in which “two teams perform back to back and a winner is decided between the two teams,” said Weinstein.

On the weekends, “we typically have our standard competitions where it’s our team versus all of the other teams that show up,” stated sophomore Madison Simone.

The varsity cheerleading competition team perfects routines and dancing spectaculars. Despite their impeccable record, the competition cheer team has seemingly tumbled below the radar since the end of the football season.  “We work really hard as a team and its nice to get recognition for our accomplishments,” Simone stated.

There is a great difference between cheering at sports games and performing at competitions. Weinstein explained that, “at sporting events we do actual cheers, but at competitions we do routines that incorporate stunts, jumps, tumbling and dance.” The sole focus of competition events is cheerleading. “Everybody is watching you but you know that you and your team have worked so hard to put on nothing but a great performance,” Simone said.

The Varsity Competition Cheer team’s next competition will be held on Thursday January 30th at Paramus Catholic High School where the team is “shooting for the 6th year of success.” Weinstein stated.