The Seniors BLUE it 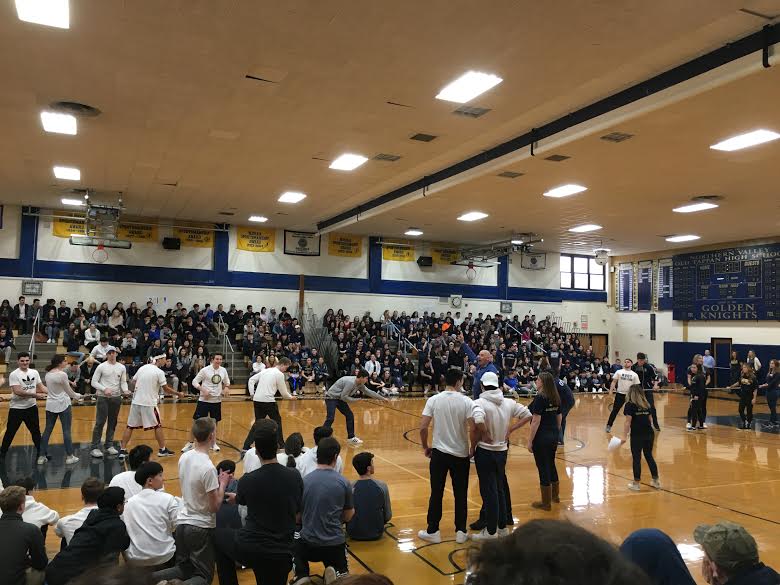 It’s the Monday after a stressful two days of midterm exams. What’s a better way to destress and relax with your classmates, peers, and upper/underclassmen than to challenge them to some exciting activities? NVOT did just that, hosting their first Golden Knights Day to wrap up the midterm season and begin a new marking period.

Golden Knights Day started at 1:15pm, after all students had attended their classes for the day with shortened periods. The school was then divided into two groups: juniors vs. seniors in the north gym and sophomores vs. freshmen in the south gym. For the rest of the afternoon, students challenged the opposing grade to earn points by winning events including tug of war, musical chairs, 3-point shooting contest, scootering, hula hoop, and tennis ball toss.

Class advisors, along with student body representatives, carefully planned and organized the event, and did a “great job with that,” said junior class vice president Zion Lee. He added, “Not only did we have little to no problems, but we were able to get lots of students excited about the event.”

In addition to competing in the various planned activities, students were asked to wear a specific color to represent their grade. The grade with the most people who wore the color they were to wear earned a point toward their total score. According to Lee, “the school spirit… undoubtedly unites all students. I cannot say I know of any other school with better school spirit!”

After an hour of screaming, stomping, and cheering, Golden Knights Day ended and boosted everyone’s “morale and allowed students to have a mental break,” said Lee.

Senior Erin Harnisch added that “it was a lot of fun and was perfectly timed because it distracted us from midterms.”

While senior Casey Cha agrees that it was an entertaining event to attend, there “was a lot of cheating, so hopefully they are more careful about the rules in the future.”

Junior class advisor Ms. Kerry Maher hopes to modify for next year’s Golden Knights Day by ensuring “the rules for each event are crystal clear” and having teachers keep score. Nonetheless, Maher believes “that the event was well received.”

According to Lee, it was a successful afternoon. NVOT hopes to continue this new tradition every year.