A Hot Dog Is NOT a Sandwich

The Lance takes on the most important debate of our time 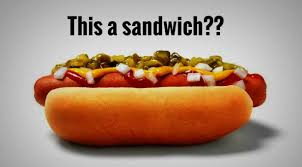 If you think a hot dog is a sandwich, then you must think cereal is soup. Or that wine is juice. Or that a taco, or a burrito for that matter, is also a sandwich. And you would be wrong with any of those claims.

A hot dog is a completely separate entity from a sandwich. If this were the animal kingdom, hot dog is a genus. People may argue that sandwich is the genus and hot dog is the species that falls under it, but that is completely invalid. Hot dogs create their own genus with separate species like The Chili Dog, The Turkey Dog, and The Corndog. So then, some might argue that if hot dogs are the genus, then they fall under the family of sandwich. BUT, you can NOT tell me that a Corndog is a sandwich. There is absolutely no way you can justify that. It’s on a stick!

Sure, Merriam Webster’s dictionary classifies a sandwich as “an item of food consisting of two pieces of bread with meat, cheese, or other filling between them,” BUT they fail to mention the fact that sandwiches are also always horizontal. One side of the bread lays flush on the plate, and the rest of the sandwich tops it. That is why open-faced sandwiches can still be classified as sandwiches even though they do not have two pieces of bread like Merriam Webster specifies.

Hot dogs, on the other hand, lie perpendicular to their plates. They are vertical in orientation. (I got you there, you did not think about THAT one did ya!?”

I will admit, at first glance, a hot dog seems to have all the necessary qualifications of a sandwich. It is a processed meat, has a carb-based exterior, and is often classified as a light lunch. How. ev. er. It is offensive to hot dogs everywhere to classify them as sandwiches. Hot dogs have worked hard to become one of the most legendary staples of American culture. No other country in the world loves hot dogs as much as the United States. To reduce hot dogs to the category of “sandwich” is an inaccuracy comparable with calling The Bachelor a “reality TV show.” Sure, by definition MAYBE it could be classified as such, BUT is it really reality?

If you believe that hot dogs are sandwiches then from now on until forever you must only order a hot dog as a “Hot Dog Sandwich.” *shudders* Ew, it doesn’t even sound right. If you are going to disagree with this fact, at least follow all the way through with it. Maybe the waitress at the next restaurant you go to will knock some sense into you.

If your mom says she is stopping at the deli to pick up some sandwiches for lunch and you asked for a hot dog, she would call you crazy. (Try it, I dare you.)

Bring me ONE menu that put “Hot Dog” under their Subs & Sandwiches category. Or even one menu that says “Hot Dog Sandwich.” If you bring me a menu like that, which I DOUBT you will be able to find, you and I will go back to the restaurant you came from, and make them change it. We cannot have restaurant owners spreading lies.

IF you STILL do not agree with me, check with the National Hot Dog and Sausage Council who defines hot dogs SPECIFICALLY as not being a sandwich. They even go so far as to claim, “Limiting the hot dog’s significance by saying it’s ‘just a sandwich’ is like calling the Dalai Lama ‘just a guy’.” I am not sure if you have seen anything from the Dalai Lama, but he is so much more than just a guy.

Are you going to take the definition of a thing from the thing itself? Or are you going to let someone else come along and tell you what that thing is and believe them? Check your values.

NONETHELESS, Merriam Webster has its own, SEPARATE, definition for hot dogs. If a hot dog was a sandwich, it would be simply listed as a synonym for sandwiches! Check your facts.

Hot dogs are so much more than a piece of meat between two sides of bread. Sure, by definition you could argue that a hot dog might be a sandwich, BUT it is fundamentally wrong to call it such. We do not have to stand for calling a hot dog a sandwich. Rise up like the buns! You must(ard) stand for what you believe in! Never let anyone tell you that a hot dog is a sandwich again.

Do you have an opinion? The Lance would love to hear it! Follow us on twitter @TheLanceNVOT or email us at [email protected]