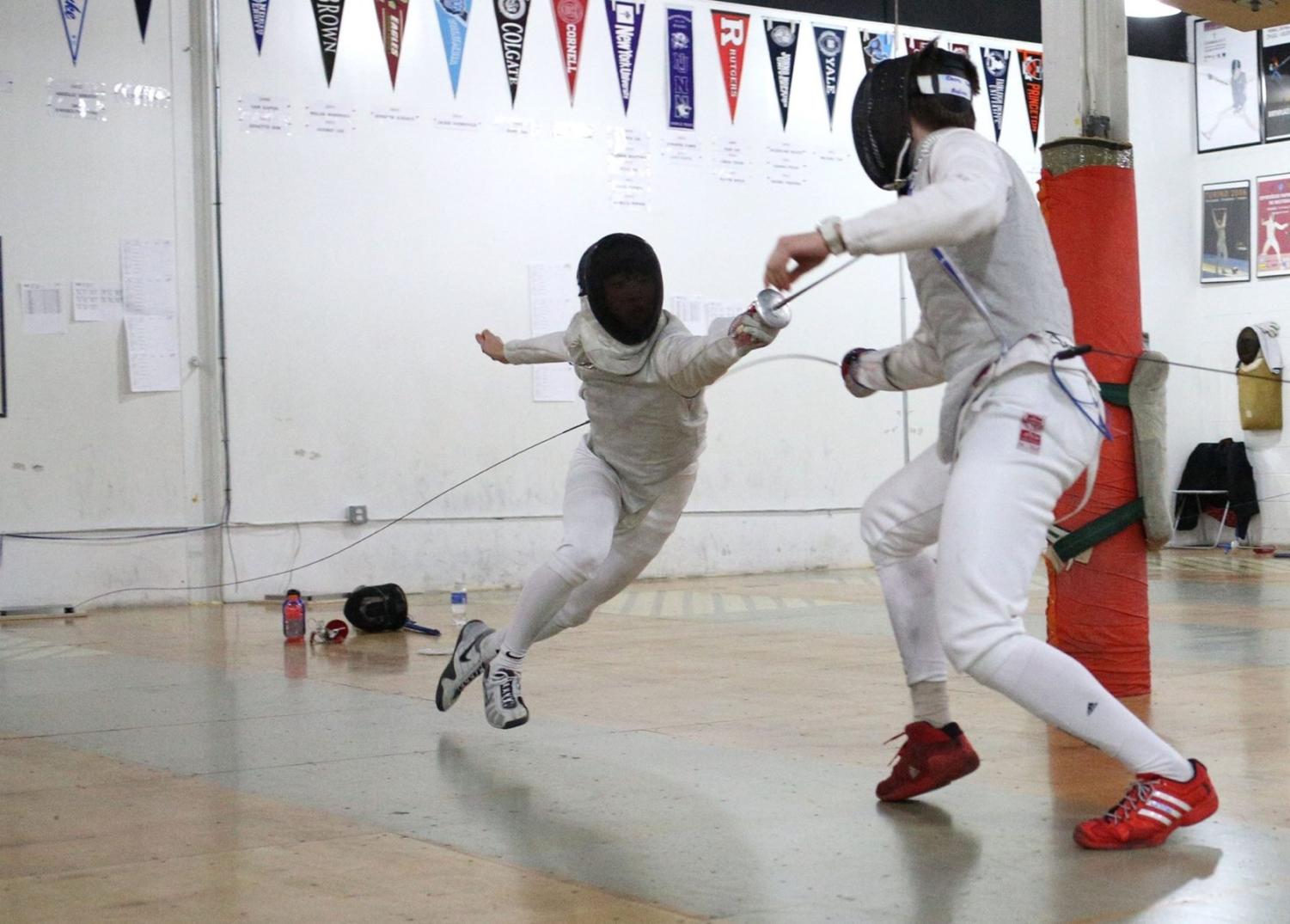 Paik, left, lunges forward towards his opponent, eager to earn a point and win the match (Joon Paik)

Paik, left, lunges forward towards his opponent, eager to earn a point and win the match

Don’t let your guard down, Paik

Blades clash, red and green lights flash. (No, it’s not Star Wars on Christmas.) Coaches scream, but no words register in his mind at the moment. Senior Joon Paik has walked off the fencing strip after placing first in another match.

Though it began simply as another sport to participate in, fencing is now a major part of Paik’s life, forever changing who he is as a student and who he is as a competitive athlete.

Since 2012, Paik has been fencing locally and internationally and he is currently a part of the Fencer’s Club in New York City where he commutes to regularly. “When I was younger, I liked the idea of playing with weapons, which was probably the reason why I decided to fence seriously,” Paik admitted.

Fencing is unique from other sports because it combines and requires both physical and mental abilities. It’s known as the “physical chess because there is a lot of thinking involved in predicting your opponent’s methods of winning as well as modifying your own plan to defeat the opponent’s strategy,” Paik said.

But the most incredible part about fencing, Paik added, is the people he meets and the relationships he has made. He said, “There’s basically no distance between an amateur fencer and an incredibly accomplished professional fencer. I talk to three US Olympic fencers regularly and I’m friends with a couple fencers on the Canadian National Team.”

Meeting inspiring people, Paik decided to commit to fencing on a competitive and international level but was met with many challenges. “I had to miss school a lot because of competitions. It’s fun to fly to new places, but doing physics problems while jerking violently in turbulence is not fun.” There were even some times where Paik’s “arrivals back home were on school days, so [he] literally had to change clothes in the car” on the way to school.

Senior Maria Chung, who fenced with Paik before, said, “Joon travels a lot to different countries to compete and he’s a really great fencer. It’s amazing how he balances his fencing among all of the other responsibilities he has and still excels.”

Mr. Mustapha Elqariani, Paik’s physics teacher, said, “Joon must have missed at least 10-12 days of school, but he was still able to do his work and keep up. He was very responsible and did what he had to do.”

One of the most difficult challenges he faced was during his junior year. “I was very close to quitting fencing competitively… I wanted to pursue other hobbies, like playing the guitar, and at the same time, I had not been performing well then,” he said. However, determined to work hard and keep up amidst the hardship, Paik continued to fence, traveling to Pisa, London, and Bangkok.

Yet, fencing and persevering through it all have paid off. Paik has recently committed to Columbia University to continue his academic and fencing career. “I chose Columbia because of the balance that they had with a great fencing team and an amazing academic program,” Paik said.

Though there were many difficult moments in Paik’s fencing career up until this point, it has taught him life long lessons that have allowed him to grow as an individual, though “most of those life lessons were from losing important matches,” he said. “Constantly working to reach a greater goal is a hell of a roller coaster because as soon as you reach a certain milestone, it hits you with more difficult challenges.”

Whatever his future leads, fencing will always continue to be a large part of his life. “I can’t wait for what’s ahead of me, having a great time in college while at the same time also fencing,” Paik stated. But for the rest of his senior year, until he goes off to college, Paik hopes to explore other hobbies that he did not have had much time for because he was always fencing.