Yejine Lee makes her way through the halls on her way to class. (Josh Lee)

Yejine Lee makes her way through the halls on her way to class.

More than Just the Mask

Junior Yejine Lee, Beyond the fencer

Junior Yejine Lee sat at the middle table at the center of the cafeteria, surrounded by the chaos of lunch. I struggled to hear her as she told me that despite her eclectic personality, she doesn’t like to be noticed and prefers to blend in.

Lee isn’t anti-social or introverted; she just doesn’t have her whole life on display. In the world of Snapchat and Instagram, it’s not often you find someone who doesn’t immediately begin a conversation by talking about themselves.

Her skill as an athlete allows her to fence for the U.S Women’s fencing team and compete internationally and travel often. She has visited Vienna, Rome, and Manchester as well as many other international cities. And yet, she rarely talks about her accomplishments and strives to separate herself from this singular image. Because the truth is, there is a lot more to Lee than just her sport.

The phrase “I don’t care what anyone thinks of me,” is used so often in high school that it’s lost its meaning. The truth is if everyone really didn’t care what everyone else thought of them, they wouldn’t have to say it aloud to justify themselves in the first place. Lee’s Instagram reflects her philosophy, with no posts except for a highlight reel in which she covers every image of her face with an emoji.

She doesn’t limit herself to labels and thinks about much more than just how she fits into the rest of the world. “What makes me happy is when other people are happy,” she said. “I know it sounds cliché but I’m dead serious, it’s weird.” But it’s not. Lee is considerate, and not just in the common use of the word. Lee truly considers things: how others feel, how they see themselves, and how they see her.

Although Lee’s emotions aren’t always showcased, her personality is far from simplistic. Junior Jessie Kim, Lee’s long-time friend, explained, “She’s not the clingy type, she doesn’t really show her affection, but once she’s attached to someone she cares about that person so much and she’s a loyal friend.” 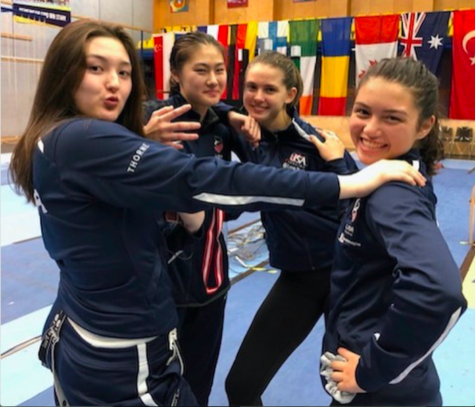 Lee, left of center, with friends at a fencing competition

Despite her career as a fencer, Lee doesn’t define herself by this success. “I don’t want to be noticed because of it. I want to blend in because people don’t treat you the same,” Lee stated.

Lee is not just an athlete; she is also an artist. She channels her creativity through artwork partly to distance herself from her fencing persona but also to express herself. Kim said, “Yejine has a realistic idea of how other people see her as a fencer, but she also doesn’t want to only be seen as one thing.” Kim continued, “She does a lot of sculptures and she’s making a portfolio; she’s always been creative.” 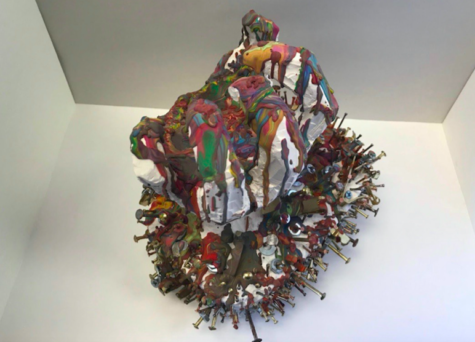 While Lee embraces her creativity, she likes to keep her interests to herself. “I try to blend to in, but I’m not everyone else,” she stated.  “Right now if I’m being different, people automatically assume I’m weird because people don’t have a good sense of judgment…they’re in high school and they don’t know much.”

“I think because everyone in high school is being judged, they want to reflect the same thing and be the same as everybody else which also includes being judgemental,” Lee elaborated.

But Lee doesn’t continue this cycle of judgment that passes from student to student. In fact, her philosophy intends to break it. She isn’t a sport, a hobby, an Instagram post, or a label, but a  hard-working student full of compassion for others.