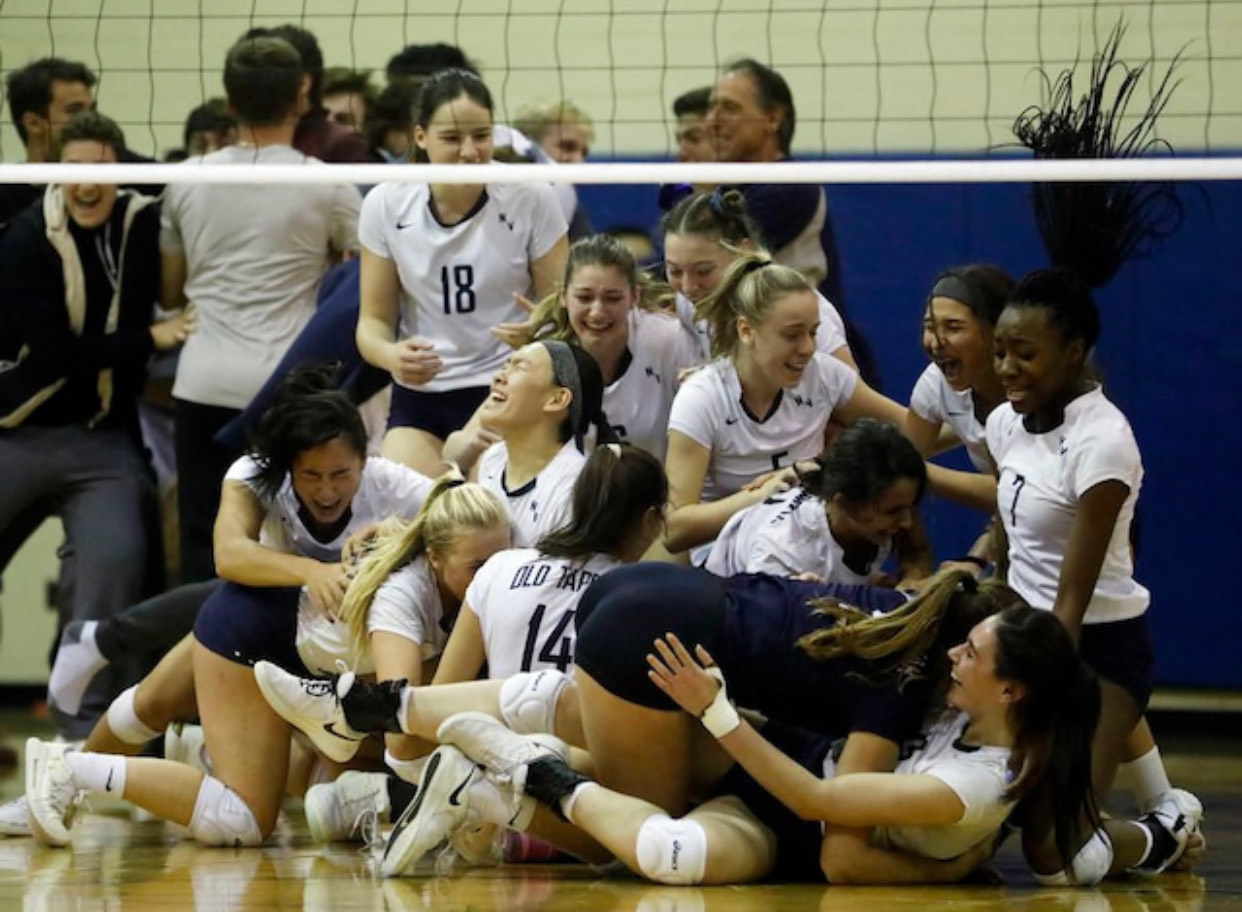 A family dog-pile follows the girls’ victory against IHA.

Teammates by Chance, Family by Choice

The South Gym at NVOT was packed with students, families, and friends as the third set began. It was the Bergen County Championship and the Golden Knights were tied with number one ranked Immaculate Heart Academy (IHA). The girls had come out strong in the first set, winning 26 to 24, but fell short in the second set 25 to 5.

After Head Coach Melissa Landeck hyped up the girls, they took the court, with newfound energy. They had come this far and were not prepared to lose now. That’s when the adrenaline started to kick it. Blood pumping, hearts beating, the Golden Knights fought for each other in every point they played. And in the third set, the girls’ fairytale moment came as Senior Nina Trent tipped the ball over the net. The second the ball hit the court, fans rushed out of the stands and the whole gym dog-piled on one another.

The Golden Knights had done it – they beat IHA and brought home the first county title in 4 years. They were then on the road to the NJSIAA State Championship when their season was cut short with a loss to Mendham in the state quarterfinals.

Despite the loss at states, the girls were still able to accomplish so much during their 2019 season. This was clearly something special.

Seniors Isabella Wong and Gianna Fasano didn’t hesitate when asked to describe the team in one word–“Family” they both answered.

Fasano truly took the concept of family to heart, sharing that “I can call all of them my sisters. I know it sounds cheesy, but it’s so true. We just have such a strong bond with one another”.

In high school sports, teams can include players of all different ages and in volleyball especially, each player brings certain skills to the table. Having a good team culture is crucial, but not all teams are blessed with this effortless team dynamic. Landeck explained that this team in particular “had that strong team dynamic. The girls came together early on in preseason and stuck together throughout the season. They had each other’s backs and that’s crucial.”

So how did the girls do it? How did they accomplish this feeling of “family”? According to Wong, it wasn’t something done by force. “We genuinely like one another,” she said, “the bonds we had were just natural, but we created it even more because preseason starts in the summer and during that we just created bonds through time spent together, especially through team bonding, whether it was pasta parties, ice cream trips, or sleepovers.”

The Golden Knights truly embodied the spirit of a family on the court as well. Junior Bella Brackenbury said, “it helped us have a lot of chemistry on the court and allowed us to work well together and talk a lot. In volleyball, you have to talk to each other and communicate well for every point that you’re fighting for, and we were able to do that in every match.”

Their culture clearly impacted their 2019 season. This family brought home the league title, Bergen County Championship, and finished off the season with a record of 22-3.

After being named Northjersey.com’s team of the year, it wasn’t just about the wins and losses for the Golden Knights, but rather the unplanned moments. The rush of adrenaline after tipping the ball over the net. The anticipation of the gym watching it hit the court, and the feeling of family as they dog-piled, celebrating each victory like their first.