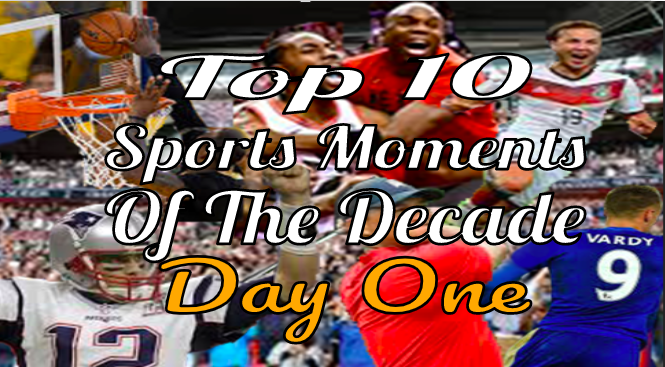 With the decade coming to a close, it is important to remember the most important events, more specifically, the defining sports moments. This is a compilation of the top 10 most memorable sports moments of the past decade.

Our list is based on two basic principles: memorability and unpredictability. The first and most important aspect of any sports moment is memorability by the general majority. For instance, if you were to ask anyone about a certain moment on this list they would surely remember it, regardless of the sport they are a fan of. Unpredictability is the second factor, as it is much more memorable and exciting to see an underdog or unexpected team win or pull off an upset. Overall, this list compiles the top 10 sports moments of the decade.
10. Raptors’ First Championship
The Toronto Raptors were on the list of 12 teams to have never won a championship, until this past June. After packaging their franchise player Demar Derozan in a blockbuster trade for established superstar Kawhi Leonard, there were many questions about how smart the deal was with Kawhi on the last year of his deal.

Despite the questions, the Raptors soared to 58 wins and finished second in the Eastern Conference. Their regular season success continued through the playoffs, where Kawhi Leonard solidified his superstar status. It is important to remember that Leonard had suffered a quad injury in his last season with the Spurs, which was the main source of doubt of his skill. Any skeptics were put to silence after Kawhi put up one of the most remarkable postseason performances in NBA history, third all time for points in a single postseason, only trailing behind Lebron James and Michael Jordan.

Aside from Kawhi’s individual performance, the Raptors as a whole proved to be a true championship team. Kyle Lowry, Pascal Siakam, and Fred Vanvleet held their own in the series and proved themselves as championship-caliber players. The Raptors managed to beat the Warriors team that was looking to win their fourth championship in five years. The only reason this accomplishment ranks as low as it does on this list is that two of the Warriors’ all-star players (Durant and Thompson) were injured during the playoff series.

Through the group stages and knockout rounds, the US went undefeated and conceded only one goal. Japan, also undefeated, won all their previous matches in regular time. Each team advanced through the knockout stage with ease. The final match was big for the US because if the team won, they would be the first-ever to win three Women’s World Cups.

Everyone thought the game would be a tight, difficult game between two very strong sides but to everyone’s surprise, the US had scored four goals in the first 16 minutes of the game. Carli Lloyd, a midfielder who had scored three of the four goals, achieved the fastest hat-trick in world cup history, was the only player to ever score a hat-trick in a Women’s World Cup final, and even contributed a goal from the half-way line. Players Lauren Holiday, Tobin Heath, Megan Rapinoe, and Alex Morgan also contributed with assists, goals, and strong performances. At the end of the game, the score was 5-2, which meant a victory for the US.