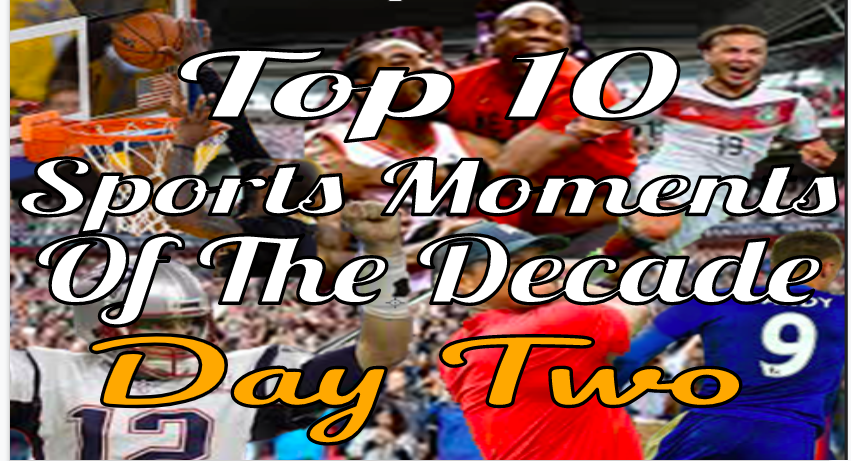 With the decade coming to a close, it is important to remember the most important events, more specifically, the defining sports moments. This is a compilation of the top 10 most memorable sports moments of the past decade.

Our list is based on two basic principles: memorability and unpredictability. The first and most important aspect of any sports moment is memorability by the general majority. For instance, if you were to ask anyone about a certain moment on this list they would surely remember it, regardless of the sport they are a fan of. Unpredictability is the second factor, as it is much more memorable and exciting to see an underdog or unexpected team win or pull off an upset. Overall, this list compiles the top 10 sports moments of the decade.
8. Gotze Goal vs Argentina in the 2014 World Cup
The 2014 World Cup Final was held in Rio de Janeiro, Brazil on July 13, 2014. The match was between Lionel Messi’s Argentina and a merciless Germany, who had won three previous world cups to Argentina’s two previous wins. Both sides went undefeated throughout the group stages and knockout rounds.

Germany won their semi-final game to advance in a relentless attack on Brazil. The host country had so much going for them—they were a flashy team led by established, big-name stars David Luiz, Neymar, Thiago Silva, and Dani Alves. Still, Germany annihilated Brazil, with a commanding 7-1 victory, the second-highest scoring margin in World Cup history.

Argentina, led by Lionel Messi and Gonzalo Higuain, barely escaped the Netherlands in the semi-final, winning in penalties.

The final was extremely tight as the first 90 minutes went by without a goal from either side. Higuain, Argentina’s striker, had two close chances in the first half with a wide shot and a goal disallowed for offside. Aside from a wide shot by Messi in the second half, the tight game had very few chances for scoring. The match went to overtime and still was scoreless in the first half of OT, but in the 113th minute, Germany’s Andre Schurrle sent a cross into the box and was volleyed in by forward Mario Gotze past the keeper. Finally, after 113 tiring minutes, Gotze ended the deadlock with a goal putting Germany ahead. When the final whistle blew, Germany had won the tournament with a 1-0 victory over Argentina. Gotze was named man of the match for his incredible goal and Germany had received their fourth World Cup victory.

The next season, Leicester was thought of just another team fighting to stay in the league, and no one considered them any sort of competition to win the league. When the season began, Leicester City went undefeated for their first six games and lost the seventh to a strong Arsenal team. And for the next ten games, Leicester continued an undefeated streak, racking up crucial points.

Quickly, Leicester gained recognition and caught everyone by surprise. After only three losses in the season, Leicester amazingly won the league, ending ten points higher than the second-place team. The odds of this team winning the league were an unlikely 5,000 to 1.

Key players in this marvelous feat were striker Jamie Vardy and midfielder N’golo Kante. Vardy, an underrated striker, scored an impressive 24 goals for Leicester, and became the league’s top scorer. Kante, a defensive midfielder, greatly contributed to Leicester’s success with a total of 175 tackles, 156 interceptions, and 71% tackle success included with his dominant midfield play.