Is Joe Goldberg a Flawed Hero or a Humanized Villain?

YOU Recap (Season One and Two) 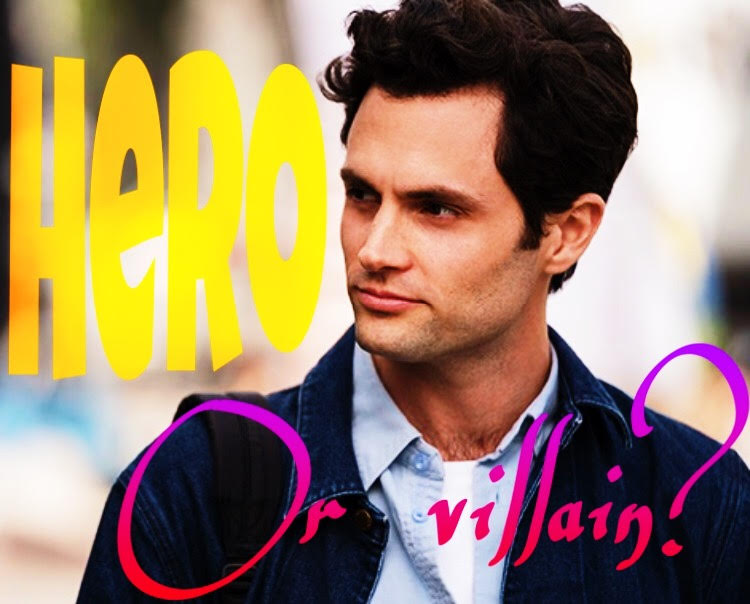 Number of Episodes in a Season 10 Episodes; 44 min-50 min
Season 1:  Joe Goldberg (Penn Badgley). Average name. Average guy. Right? He is just a simple guy in search of a simple life. He wants what most people want out of life: love, enough money to pay the bills, maybe a few kids down the line… oh and to murder the people who mess with him and the people he loves.

Season 2: Goodbye New York. Goodbye Joe Goldberg. As season two introduces a whole new start for Joe, who now goes by Will Bettelheim, you notice that many of this season’s events parallel those of season one (except for arguably the biggest plot twist in Netflix history). You watch Joe fight the desire to find love again and fail miserably, allowing events to unravel and spiral out of control. Blood and tears are shed, but all in the name of Love (Victoria Pedretti)…right?

Total Number of People Joe has Killed: 8. Fun Fact: The Golden State Killer’s body count is 13. Good to know that Joe is on entering the big time and on his way to becoming a full-fledged serial killer.

Ending
Cara: Season One
LOVED it. It was a twist no one was REALLY expecting. You find yourself thinking Beck (Elizabeth Lail) is going to make it out…but then she doesn’t…and you don’t know how to feel. You don’t know what you want besides another episode…taking us right into the next season.
Eve: Season Two
HATED it. Joe is OBVIOUSLY a messed up dude, but he has always had a set goal: find the “perfect” girl and settle down. Love is without a doubt Joe’s perfect girl; and during this season, they both got away with so much without any repercussions. For Joe to immediately start fixating on his next-door neighbor made the entire season seem meaningless. It was as if nothing meant anything to Joe. Maybe that’s the point…but, Joe does have humanizing moments and the very last scene simply took away all of his prior attempts to be normal. It was like Netflix was just trying to stretch the show out longer (not that we don’t want there to be another season—WE DO—we just think they should have come up with a better transition scene into season three). And also let’s not forget about the HUGE plot twist that happened at the end. (SPOILER!!! →) Who expected LOVE to also be a psychopath killer?

Analysis: Is he a Flawed Hero or Humanized Villain?
Eve: Flawed Hero
Clearly, Joe has done some pretty terrible things in his life. But, as he has said over and over again, love is the root of his mayhem. Throughout both seasons, he only kills people who hurt the people he deeply cares about, disregarding Beck’s death of course (which was necessary because if he let her go, she would have exposed him to the world and Joe just wanted to save himself which doesn’t necessarily label him as a psychopath). I’m not saying I condone his behavior. I’m saying I understand it. He is a good person who protects the ones he loves (by killing bad people) which is heroic (in a very messed up way). But he is also evidently mentally unstable. Throughout season two, Joe has very realistic visions of Beck and his mother showing his mental instability, possibly coming from his rough experiences during his childhood.  However, being mentally unstable is not his fault and should not determine if he has a good heart or not. At the end of the day, Joe shows humane characteristics. He cares about children. He loves and shows remorse. Therefore, while he isn’t totally sane, that doesn’t diminish the fact that he is a good person deep down. You find yourself rooting for Joe because deep down you know he is a good person.

Cara: Humanized Villain/Psychopath
Joe Goldberg. Definitely a psychopath. Since the first season, Joe presents himself as an incredibly charismatic, charming, and attractive person. Through his narrations in the show, he humanizes himself which creates a “veil”. Through this veil, Joe develops himself to be the perfect man everyone dreams of. He is caring, willing to sacrifice anything for his love, rational, intelligent, and also a cute bookstore employee. However, do not let this veil fool you; let’s look at reality. In the span of two seasons, Joe has gotten away with murdering eight people. What kind of person murders eight people without even becoming a suspect? A true psychopath. The even scarier part is that he reasons out all of his murders. He validates these murders by saying that although this is a wrong choice, it is okay because it was for love, and according to Joe, anything done for love is acceptable. I mean, who wouldn’t want a man who would murder eight people for you? Me, for one. A villain is always the hero of his own story and I can’t see Joe as anything else.

Rating
Cara: Season One: 7/10
Overall, season one was definitely entertaining, but not as exciting when it’s compared to season two. Looking back at the season, we definitely were expecting most of the murders that Joe committed. Peach’s (Shay Mitchell) death was easily predictable before it happened, but that may have been because she was not a likable character from the start.
Eve: Season Two: 9/10
This season was phenomenal, but the only reason it does not get a 10/10 was that the neighbor scene at the end of the last episode ruined it. The ending felt as if the producers were trying to squeeze another season out of the show.

If You Liked YOU, You Should Also Watch