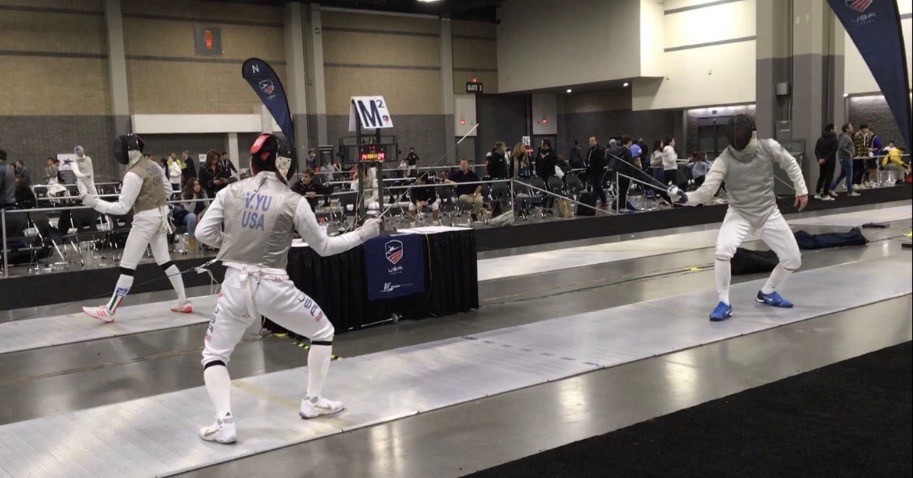 Yu fences against an opponent in competition (Courtesy of Vinni Yu)

Yu fences against an opponent in competition

Sword Fighting His Way to the Top

During the school day, sophomore Vinni Yu wears the mask of an average NVOT student, but outside of school, his mask protects him from swords handled by some of the top-ranked fencers in the nation.

Although his accomplishments (Yu is currently ranked 8th nationally in his age group) may seem impressive to his classmates and friends, they are not good enough for him. He constantly pushes himself to be better—as a fencer, a student, and a person.

Fencing is a very demanding sport that requires players to use both their physical abilities and their minds to take down opponents. Yu described it as “the physical version of chess,” because it requires “being able to adjust and understand how your opponent thinks, which is extremely difficult to learn, especially since different opponents require different skills to beat.”

To Yu, fencing is not just a sport, but rather a lifestyle. He said, “Fencing, to me, is the driving force behind a lot of the decisions I make and personally, I don’t enjoy anything else more.” Fencing has played a crucial role in shaping who he is, and “taught [him] to push towards anything with everything [he’s] got in order to achieve a goal.”

Since fencing plays such a large role in defining his life, Yu strives to be the best that he possibly can. Yu said, “I’m not famous or well-known in the tight community fencers have. I do have my fair share of achievements so far, and these may seem incredible to outsiders, but in reality, there is a tremendous amount of room for improvement.”

Senior Yejin Lee, who knows Yu through fencing as well as school, described him as “one of the most hardworking people [she] knows.” She said, “he puts his full effort in everything that he does. Not only is he a smart person and a great fencer, but he also is a human with a great personality and a kind heart. When I needed a subject for my AP 2d class, even with a complicated schedule, he didn’t hesitate to stay outside in the snow for me to get pictures of him. He also helps little kids in class by talking about the different ways of approaching a situation when they fence. Vinni is also just fun to be around. He knows when to take things seriously and when to relax and have fun.”

Sophomore Nathan Kim, who is a friend and classmate of Yu said, “he is a really good student as well as an amazing athlete— I really respect his work ethic both in and out of school.”

Although Yu appreciates the recognition from his peers, he hopes that one day “fencers within the elite/professional level [will] know [his] name.” However, since he still has “a long way to go for that,” Yu will continue to work hard to achieve his goals.