Review: On My Block Season 3

A wild (Father) Goose chase from start to finish 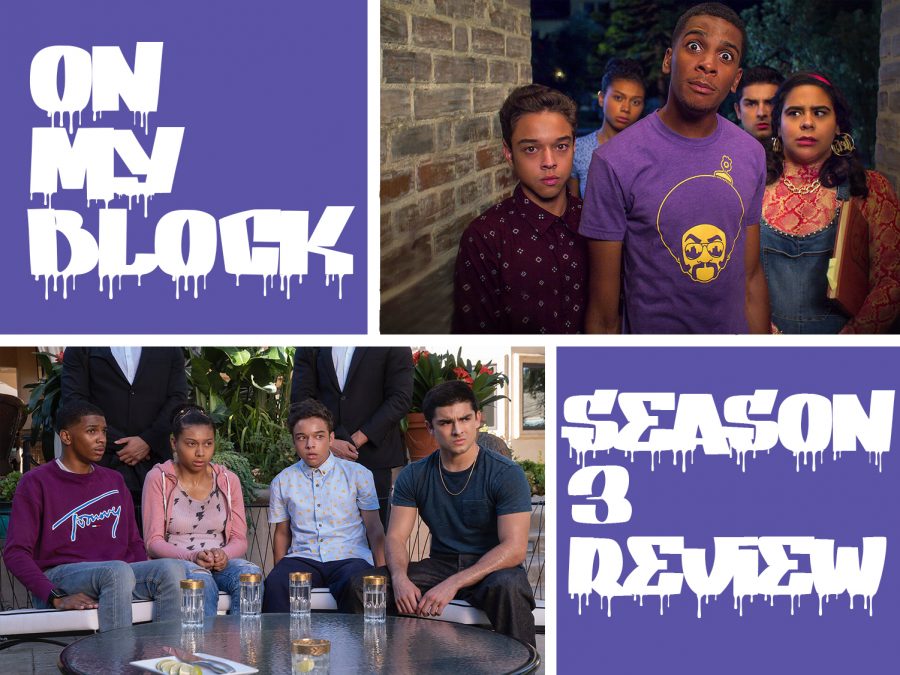 The third and final season of On My Block picked up where season two left off, with the core four: Monse Finnie, Cesar Diaz, Ruby Martinez, and Jamal Turner—kidnapped and thrown into an anonymous white van. Season three opened with the identity of the kidnapper: Cuchillos, leader of the street gang, the Santos. After the violence and vice of season one and going head to head with the Prophet$ in season two, Monse, Cesar, Ruby, and Jamal wanted their lives to return back to somewhat normal. However, Cuchillos tasked the four friends with finding Lil’ Ricky A.K.A. the owner of the Rollerworld money and her ex-lover, who has been off the grid for years. Season three of On My Block became available for streaming on Netflix on March 11, 2020.

Season three was riddled with major inconsistencies and plot holes. Jamal was set on discovering Lil’ Ricky’s identity but abruptly stopped to help Cesar find his brother, Oscar, A.K.A. Spooky, after he was kidnapped by the 19th Street gang. Plus, at the end of the season, there is a two-year time jump, but still no update on Lil’ Ricky. Next, a new gang, the 19th Street, appears out of nowhere without any background or history—we don’t even recall any of their names. This season’s plot was dry, with no twists like we would expect from the past two seasons. The biggest plot twist was waiting to see if Oscar would be killed by the 19th Street members, a gaggle of fifteen-year-old boys, who were hard to take seriously.

This season we got a BUNCH of new—and frankly, unnecessary—characters. For example, Kendra first appeared while Oscar and Jamal dug up Lil’ Ricky’s (empty) grave. At first, Jamal feared she was one of the Prophet$ seeking revenge on him after he stole the Rollerworld money, but it turned out she was just a secret admirer. But we don’t see how this addition was necessary this season. She doesn’t even appear in the horrific two-year time jump ending (we’ll get to that later).

However, major character developments did take place this season. First, Oscar changed significantly, as he went from a fearful gang leader to stepping into his role as Cesar’s older brother. In a heated speech to his estranged father, he said, “The worst part about growing up without a father, is having to be a father to a brother without ever being a son.” Although Cesar’s friends, especially Monse, did not appreciate Oscar, he was willing to risk his life and kill Cuchillos so that his brother and his friends could live a life that he was not able to live.

This season also allowed Jasmine, formerly just an annoying, Ruby-obsessed side character, to finally find her identity and a place where she belongs. Even though Jamal established himself as a leader, he acknowledges Jasmine’s impact: “If there are any other co-leadership opportunities, consider yourself considered.” It was also clear to see that the show tried to focus on Cesar and Monse, especially their relationship (we didn’t really care about that though, sorry Monsar fans), but other characters’ storylines and development are far more compelling to viewers (*cough* Ruby, Jamal, and Jasmine *cough*). We also felt that Ruby lost his signature Ruby-ness and turned into an angsty, melodramatic teen. Although getting shot at your late girlfriend’s Quinceañera will do that to a person, we anticipated character growth from this, but we got regression. Not only that, but his family was shown to be an integral part of his life in past seasons, so the disappearance of his family for most of this season was very disappointing.

Our favorite scene was when the five friends hijacked the music video set of Ainsley Riches, a tween pop star akin to JoJo Siwa, only brattier. In order to blend in, Jamal pretended to be Swaggie J, a persona he made up (on the spot, may we add) in order to get close to Ainsley. Although it wasn’t integral to the plot, this scene was enjoyable and, as always, Jamal lit up the screen.

Without a doubt, the worst scene was when Monse kissed Cesar’s older brother, Oscar. It was unnecessary and served only to create more tension between Cesar and Monse, which there was enough of already. Afterward, when Monse told Cesar about the incident, he was so understanding—but Monse kept pushing it like she wanted him to be upset. Not to mention, it was uncomfortable to watch and the age difference made us cringe. Wasn’t that illegal?

Season three of On My Block left us feeling unsatisfied. Plot-wise, throughout the whole season, the writers made Cuchillos seem like such a threat only for her demise to be underwhelming. Furthermore, the main characters’ efforts went unrewarded as Lil’ Ricky’s true identity was never revealed. Cesar’s conclusion was a major let-down as well. His friends spent three whole seasons trying to find a way for him to leave the Santos, but, ironically, he ended up as the gang’s leader in the end. The rest of the main characters, who endured trial after trial together over the course of three seasons, ended up unable to even make eye contact at school. To have each group member go his or her separate way, save for Ruby and Jasmine, who actually turned out to be a really cute couple, was extremely disappointing. When Monse left for boarding school, she promised to never forget her friends, but that is exactly what happened as the group photograph that she kept by her bed moved farther and farther away. For a show that emphasizes the importance of friends being a family, it was devastating to see this family part.

Season three of On My Block held an underwhelming amount of plots: the brief return of Cesar and Oscar’s father, continuing the search for Lil’ Ricky, Jamal’s stalker-esque secret admirer. However, none of them seemed to connect in a way that contributed to the plot as a whole. Had they been explored just a little more, these storylines could have intersected in a way that made sense for the show. All in all, season three simply didn’t live up to the hype generated by the previous two seasons. However, fan-favorite Jamal carried the series on his back in one of his “go-bags,” and we would gladly watch the fourth season if it focused on Jamal solving another Rollerworld-style mystery.