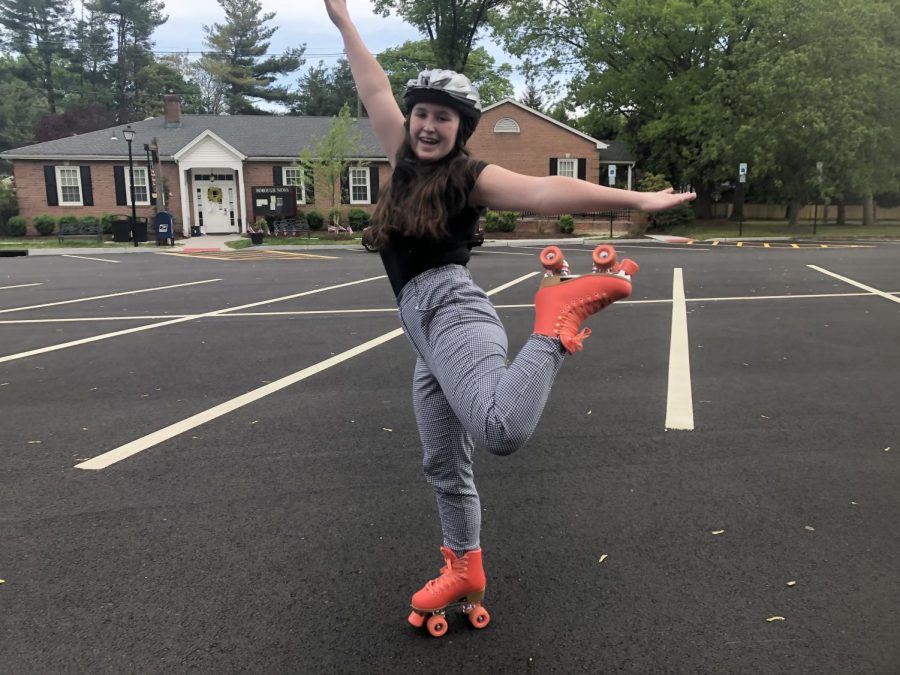 Olivia Genco takes on roller skating for a week

Fueled by this iconic TikTok and inextinguishable quarantine boredom, roller skate mania has taken over. Countless people (me included) scrambled to hop on the trend, causing nearly every online skate shop to sell out of the coveted four-wheeled roller skates. Fortunately for me, I managed to get my hands on a pair of reasonably priced, trendy skates just before they had all been bought up. Over the course of one week, I will be tracking my skating progress and seeing if this skating trend lives up to the hype.

My skates arrived about a week after I ordered them, and I couldn’t wait to try them out. However, I was, unfortunately, forced to wait to try them out because I had to take an AP exam. Looking for a post-exam stress reliever, I got out my skates and drove to the smoothest parking lot I could find, bringing my sister along for moral support. Upon putting on the skates, I was surprised to find that, despite my terrible lack of balance that had caused me to quit ballet in the third grade, I was able to stand in them. Why, I was even able to move, very slowly, but move nonetheless. Although, I will admit, that I was not really gliding on the skates, and instead, I was taking baby steps and only gliding whenever I was going slightly downhill. After doing a couple laps around the parking lot, I slowly became more comfortable on the skates, despite the fact that I had fallen backwards onto the ground a grand total of three times. Still, I would not be deterred from reaching TikTok-roller-skating-girl status.

On day two I realized that in order to get decent at roller skating, I would have to learn proper techniques as opposed to just going out and winging it. So, I spent my morning binge-watching videos about basic skating techniques and set out to apply them. The first thing I noticed upon putting my skates on for the second time was that my legs were shaking like crazy. My muscles were sore from yesterday’s skating, which made getting started even more difficult than before. However, once I adjusted back to the feeling of being on skates, I was far more confident than the day before. I took the tips I learned online and applied them. I was actually able to push myself properly and create momentum to move at a slightly faster rate. I only fell over twice instead of three times, but this time I fell over the safe way, low to the ground and onto my hands and knees. I had by no means become a pro-skater, but my progress had already begun to show itself.

I pleasantly surprised myself by not falling at all! Not even on my knees! Sure, there were some times where I came close and got tripped up on rocks or cracks, but I managed to catch myself before I could wipe out. I continued to progress, my strides were more powerful and I was able to go a lot faster. While before I could only move quickly on the slightly downhill part of the parking, this time I actually moved my quickest on the flat parts. Still, my skating was by no means TikTok-worthy. I would have to stop and reset myself frequently and had the tendency to hunch over my skates for balance. I would need a lot more practice to make my skating look relaxed and effortless, but I knew that most of that would come with time, practice, and confidence.

Confident from the previous day’s success, I headed back out–determined to go two days in a row without falling. Naturally, the first thing I did was fall backward onto the pavement while trying out a new move. Having learned an important lesson about not becoming overly confident, I picked myself off the ground and got right to skating. The first lap was a little rough, as I was still shaken up from the unexpected fall. However, once I got over the first lap, I was smooth skating. After getting comfortable, I even went back to practicing the same move that I had fallen on earlier. Skating became a lot less scary. I even became brave enough to turn on my music as I skated, when before I was petrified that any noise may throw me off balance and cause me to fall over.

Friday evening I headed back up to the parking lot, ready to finish the week on a strong foot. I would like to think that I succeeded in my task of learning, especially since I was able to go a second time without falling, and I was able to skate a lot faster than before. I was by no means as graceful as the girls on TikTok, but I think I looked pretty good for someone who had only gone skating a grand total of five times. Most importantly, my confidence was at an all-time high. Going into this, I worried that I might keep falling and eventually give up on getting back up. I worried that my lack of balance would prevent me from improving at all, that I might not be able to push with one leg at a time and glide on my skates. I was very pleasantly surprised that I was able to get the hang of it. I’m no natural, but skating ended up being really fun to learn, and I am excited to pursue it.

If you’re looking for a new skill to pick up on during quarantine, I would highly recommend roller skating. It’s relaxing, it gets you out of the house, and it’s really good exercise without actually feeling like exercise. Although most skates are sold out as of right now, if you’re thinking about giving roller skating a try, I completely recommend ordering yourself a pair when they’re restocked.