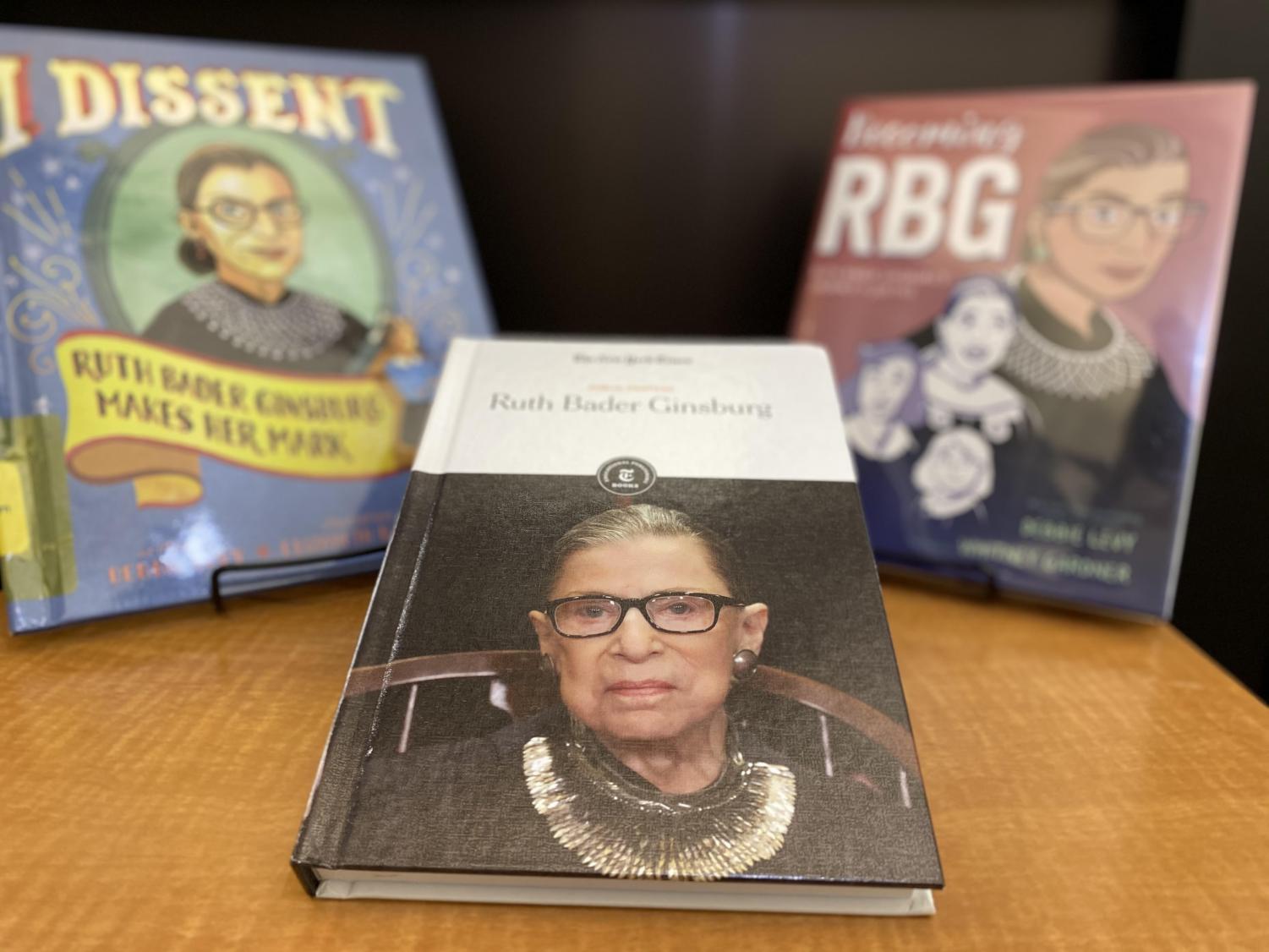 RBG’s legacy can be seen in many different ways–and publications. (Jonah Kim)

RBG’s legacy can be seen in many different ways–and publications.

On September 18, Ruth Bader Ginsburg passed away at 87 years old from pancreatic cancer, marking the end of her 27 years in the Supreme Court, and her decades long career in law. Before her passing, she had inspired films, T-shirts, mugs, SNL skits, artwork, workout videos, jewelry, and even got tattoos made in her honor! You would never guess that a Supreme Court justice could influence so many people, but Ginsburg wasn’t like any other justice. Her groundbreaking cases and powerful dissenting opinions have earned her the nickname “Notorious R.B.G”—inspired by the American rapper. Even before her unfortunate passing, Ginsburg secured her status as a pop culture icon and history making Justice.

Ginsburg has made history since the start of her career in the 70s. She devoted her life to fighting discrimination in the law, and even fought for the rights of others while facing discrimination herself. After graduating first in her class from Columbia Law in 1959, Ginsburg realized that almost every law firm in NYC would not hire her simply because she was a woman. Although her gender caused people to underestimate her, Ginsburg’s talent did not go unnoticed. After an adamant recommendation from her former Columbia law professor, she finally got a position as a law clerk in the U.S. District Court for the Southern District of New York.

Though it is impossible to fit the entire impact of Ginsburg’s career into one article, it is crucial that students understand her legacy and what she has accomplished in ensuring everyone is protected equally under the law. Our generation should know that many of the laws that fight discrimination against women, men, and marginalized communities are in place because of Ginsburg. She redefined the way that law views equality and has inspired many young people today.

Junior Amelia Murphy said that Ginsburg was someone that “I’ve always looked up to because … she’s always been a huge women’s advocate… even for a bunch of marginalized groups in this country. She definitely represents the change that I’ve wanted to see in this country for a while now.” After her death, Murphy said that she felt “helpless” and that it was a “huge loss.” She said that Ginsburg’s death “opened up a huge gap and it made you realize that she was really important in furthering those important issues [women/POC rights]” and made sure that “a lot of people in this country were protected.”

The first case that Ginsburg brought to the supreme court, Frontiero v. Richardson, 1973, set the tone for the rest of her career. Air Force Lieutenant Sharron Frontiero was seeking housing and medical benefits for her husband, but was denied. However, when she realized that men in the Air Force automatically get benefits for their wives, she sued. The Court agreed that this was unconstitutional, and Frontiero won by an 8 to 1 vote.

Another famous case that Ginsburg argued to the Supreme Court was Weinberger v. Weisenfeld, 1975. Widower Stephen Weisenfeld was refused survivors’ benefits when his wife died in childbirth, even though she had provided more income than him. He sued when he realized that these benefits were available to widows but not widowers. Ginsburg argued that his wife Paula was being discriminated against as well, because her contributions were not regarded the same as a man’s. They won the case by a vote of 8 to 1.

Through cases like these, Ginsburg highlighted the fact that gender inequality benefits no one. She fought laws that reinforce the stereotype that men were the breadwinners and women were housewives. She once mentioned that arguing these cases made her feel like a “kindergarten teacher” because she had to establish her arguments to justices who truly did not believe that gender discrimination existed.

Ginsburg also played a vital role in many groundbreaking cases during her career on the Supreme Court:

Ledbetter v. Goodyear Tire & Rubber Company, 2007: Lilly Ledbetter realized she was being paid less than her male coworkers for the same job and brought her case to the Supreme Court. Even though the Supreme Court ruled that it wasn’t discriminatory because Ledbetter had waited more than 180 days to sue, Ginsburg read her dissenting opinion, explaining how discrimination in wages happens over long periods of time. In response, Congress passed the Lilly Ledbetter Fair Pay Act.

Whole Woman’s Health v. Hellerstedt, 2016: The Supreme Court found that Texas could not make it more difficult for women to get an abortion by placing restrictions on abortion clinics and doctors who worked there. The Texas Solicitor General argued that women could go to New Mexico for abortions, in which Ginsburg responded that his argument implied, “To protect our women, we need these things. But send them off to New Mexico… and that’s perfectly all right”.

Even after her death, Ginsburg continues to make history, being the first woman to lie in state at the US Capitol. Her 20 year long battle with cancer caused many politicians  to call for her to step down, but Ginsburg never gave in. When asked in an MSNBC interview how she wanted to be remembered, Ginsburg simply said as “someone who used whatever talent she had to do her work to the very best of her ability. And to help repair tears in her society, to make things a little better through the use of whatever ability she has. To do something… outside myself”.

After being an active Supreme Court Justice until the age of 87—while fighting cancer and those urging her to retire—there is no doubt that Ginsburg worked to the “best of her ability”. After all, they call her “Notorious R.B.G” for a reason.