There’s a Congresswoman Among Us!

AOC plays Among Us to encourage voting 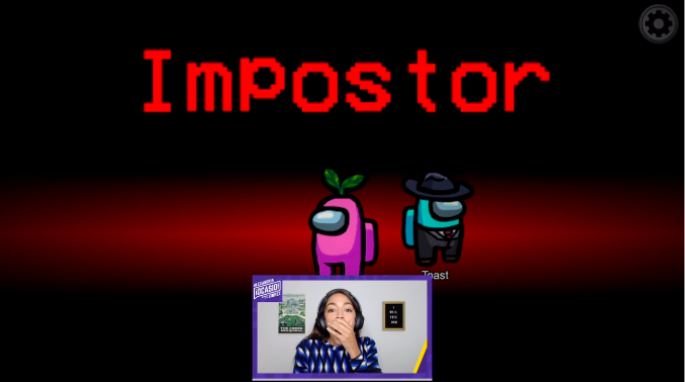 AOC finds out she is the impostor and must kill her crewmates to win.

On October 20, in possibly the most Gen-Z thing a politician has ever done, Congresswoman Alexandria Ocasio-Cortez, a.k.a. AOC, live-streamed while playing the game Among Us to encourage young voters to get to the polls. Joined by Congresswoman Ilhan Omar, AOC’s Twitch livestream lasted over three hours and had a total of over 5.5 million viewers. After all, a politician playing video games with a live audience to get people to vote is a first.

The game Among Us has become wildly popular in recent months, so AOC took advantage of the game’s popularity to reach younger voters. In Among Us, ten crewmates on a spaceship must complete their various tasks in order to win; however, there are up to three imposters among them, who must kill all of the crewmates without getting caught in order to win. Throughout the game, crewmates can report dead bodies and call emergency meetings to deliberate on who the imposters are and vote them out. Whoever receives the most votes gets ejected, but it’s not always the imposter.

Having fun with other gamers and Twitch streamers made the congresswomen surprisingly approachable—so much so that you could forget they are politicians. Watching AOC and Omar learn how to do tasks, attempt to kill crewmates, and determine who the imposters were with other players was very entertaining. AOC got into heated debates with other players, and at one point the congresswomen were accusing each other of being the imposter!

Even when AOC got caught up in the fun of Among Us, she never strayed from her goal of encouraging viewers to participate in the upcoming election. One big aspect of the game is voting for the imposters, and AOC never missed a chance to drop hints, such as “I’m voting early!” and “Mail it in!” Even when she wasn’t talking about the election, viewers could see a sign that read iwillvote.com behind her.

One of the highlights of the night was AOC being the imposter for the very first round—much to her dismay. The congresswoman wasn’t too excited about killing her fellow gamers, which made it that much more entertaining. At one point, AOC and Omar were the imposters together! AOC was too hesitant to kill anyone, but Omar proved to be surprisingly good at being an imposter. Even when the two of them weren’t the imposters, the other gamers joked that no one wanted to kill the congresswomen.

Junior Grace King enjoyed watching AOC doing an everyday activity like playing video games. She said, “it was really cool to be able to see someone who you think is in a big position in life do something normal. It makes them seem like more of a person and less of a public figure.” King also believes using video games is an effective way to inform young people and encourage voting because “most kids—even some adults—will watch video games and play video games.”

There’s no doubt that this livestream helped AOC spread her message—her livestream ended up being the third largest in Twitch history, with over 430,000 viewers at its peak. She hinted at the end of the stream that she hopes it wasn’t her last—so there will most likely be future streams from the congresswoman. Whether you agree with AOC’s views or not, her livestream is an example of how the world of politics is changing to reach out to Gen-Z.