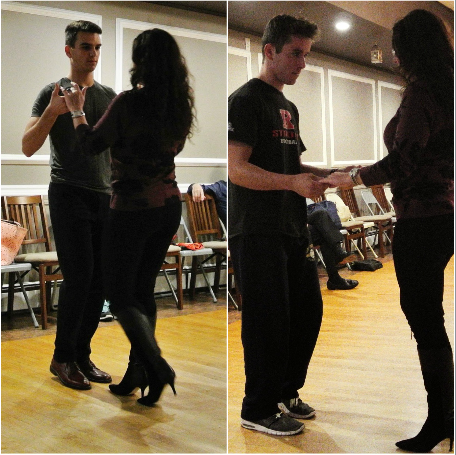 It was a cool, crisp October night as two common men walked through the door that welcomed them with the jingle of bells. Fear and intimidation crept through their conscience as they shared a love seat. As they filled out the consent forms confirming that there was a risk of injury, neither could get the loud classical music out of their heads nor the calming scent of candles out of their nose. The boys knew it was only a matter of time before they had to start dancing on the floors of Anchor Dance Studio.

Seniors Ryan DePhillips, and I were taking on our first dance lessons. Ahead of us was the goal of learning the foxtrot and salsa.

The foxtrot is a dance performed to music written in 4/4 time. The origin of the dance is unknown, but many people claim Harry Fox, a Vaudeville actor, first started doing it in his shows during the 1920s. It’s typically a smooth, romantic dance that combines slow steps and quick steps. If you were to compare it to another dance it would be the waltz because you are accompanied by rises and falls. This was our first dance, so warming up and finding the steps took longer than we had hoped for. Personally, my flat shoes helped me add more attitude and flare to the pauses that are incorporated in the dance. I also found that it was easier to “float” in and out of positions. On the other hand, DePhillips said “I wish I had a pair of true dancing shoes because my Stefan Janoski’s did not perform to the standard I had hoped, especially since I was a beginner.”

“When I first saw the moves I thought it would be simple because it was only two and a half steps to either side, but it ended up being a lot more than just taking steps. I did think it got me synched to the rhythm for the later dance moves,” said DePhillips.

More commonly known, salsa is a dance with a strong Cuban influence. This dance was the tougher of the two due to our body stiffness. It was a simple few side-to-side and frontward and backward steps, but because we lacked confidence in our arm movements, we struggled to make it look as if we were salsa-ing. Another problem that arose during this dance was the spin that is involved. Because of our lack of height, we experience difficulty being able to fluently spin our partner. A quick fix we learned was to keep our fingers strong, “read our watches” and curl our wrists up.

We were fortunate to watch these dances done properly as the other dancers around us jumped in every so often to help out. The experience was very satisfying as the studio provided us with whatever they could to help us learn how to dance. We both feel as if this is something that everyone should do because it’s an activity that forces you to have fun. We recommend if you do go, try to wear flat shoes and “play the part” in order to maximize your experience.