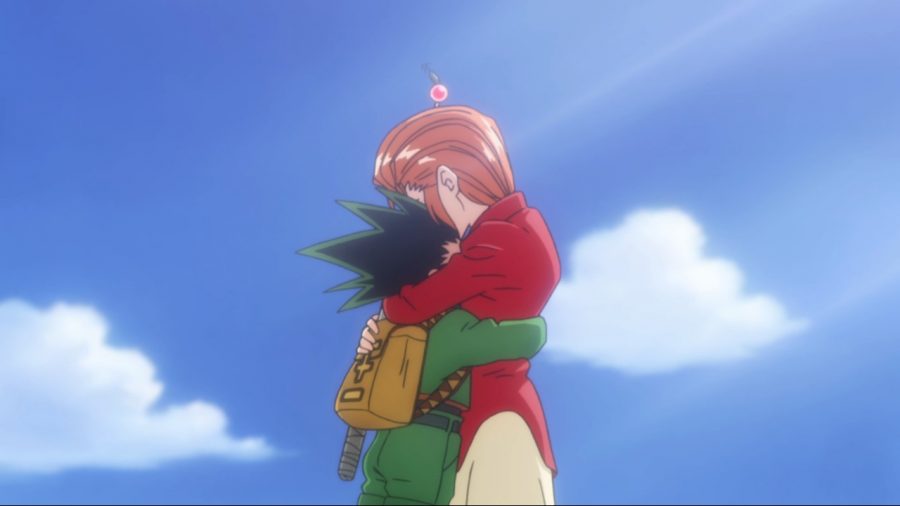 Gon hugs his caretaker, Mito, goodbye as he sets off to take the Hunter Exam.

Anime is often looked down upon because it is so different from Western animation—its niche style usually consists of characters with large eyes, minimal lip syncing animation, and choppy frame rate—but you can’t rule the genre out completely if you haven’t tried it. There are tons of fantastic anime out there that will make your new year a lot more interesting. If you haven’t had the chance to watch new shows or are looking to get into anime, now is the time to get started! Here is a list of five shows to watch to whet your anime palette:

Itadori Yuuji is your average high school student: he loves movies, dogs, his friends, and his family. His life gets thrown out of whack after Fushiguro Megumi, a Jujutsu sorcerer, confronts him after he discovers a relic that houses a powerful curse. Itadori is soon swept up in a new side of the world where sorcerers fight curses to keep humanity safe.

So far, the series is packed with spectacular action scenes, their intensity boosted by the high quality graphics, animation, and music. As the story progresses, Itadori’s morals are challenged by new obstacles. Itadori fights to keep his morals intact as he battles curses and is forced to make difficult choices. Itadori’s story is not hard to become invested in, and it’s incredibly rewarding to see him grow as a person and a Jujutsu sorcerer throughout the show. The anime is relatively new and the first episode was released on October 3, with updates every Friday.

Attack on Titan
Available on Netflix, CrunchyRoll, and VRV

Citizens in Attack on Titan live a sheltered life in Ragako, surrounded by sturdy walls to protect them from man-eating creatures known as titans. However, the walls don’t hold up forever, and titans eventually breach the city. The abrupt turn prompts 12-year-old Eren Yaeger to fulfill his dream and finally join the Survey Corps, an organization that holds expeditions beyond the walls, into a world where the titans roam free.

Eren’s journey to becoming a Survey Corps member is filled with challenges and losses that tug at our heartstrings. The story of Eren and his fellow recruits creates an emotional bond between us and them as we watch them fight against the titans. This show immerses us in an intense battle between humanity and the titans as they try to survive in the harsh reality that lies before them. Season four was released last month, so there’s no time like the present to catch up, especially with new episodes every Sunday.

This anime is a classic that will make your head spin with the protagonist/antagonist’s tricky logic and plot twists. This show follows a young man named Light Yagami after he finds a notebook from a Shinigami, or god of death, which allows the user to kill a person by writing their name in the book. Light takes to the book immediately and starts to carry out an agenda: rid the world all criminals and evildoers. The news covers the mysterious deaths, leading the world’s greatest detective, L, to take on the case.

This show is both immersive and elusive: it allows its viewers to try and piece together the puzzle, only to completely debunk our own logic with unexpected turnarounds. The intertwined stories of all the characters and unanticipated events creates a thrilling narrative that puts Death Note in my top five.

Hunter X Hunter is often looked over because of its childish premise, featuring a young boy who aspires to become a Hunter in order to find his father. But don’t be fooled—there’s a lot more to Hunter X Hunter, commonly referred to as HxH, than what meets the eye. Despite the innocent charm of the main protagonist, Gon Freecss, the show also has a fair bit of unexpected darkness, making it enjoyable for viewers of all ages.

Hunter X Hunter emphasizes Gon’s imperfections along with his strengths, humanizing him and allowing us to better connect with his story, while showcasing the show’s attention to detail in character development, world building, and plot progression. These intricacies are even woven into the music and art and enhance the allure of the narrative.

Kamado Tanjiro, a boy known for his selflessness, is devastated after his family is ravaged by a demon, leaving only his younger sister, Nezuko, alive. However, Tanjiro soon learns that Nezuko has been transformed into a demon. Determined to save her, Tanjiro joins an organization called the Demon Slayers to try to find a cure for her. The animation takes the show to a new level, even using 3D models in some of the fight scenes.

Tanjiro and Nezuko make more discoveries about demons on their quest to turn Nezuko back to normal. As their journey progresses, they encounter plenty of new allies as well as new enemies that greatly raise the stakes of their adventure. Despite the careful attention to detail and the beauty of the animation, this series is quite gory—I would not recommend it to the squeamish.