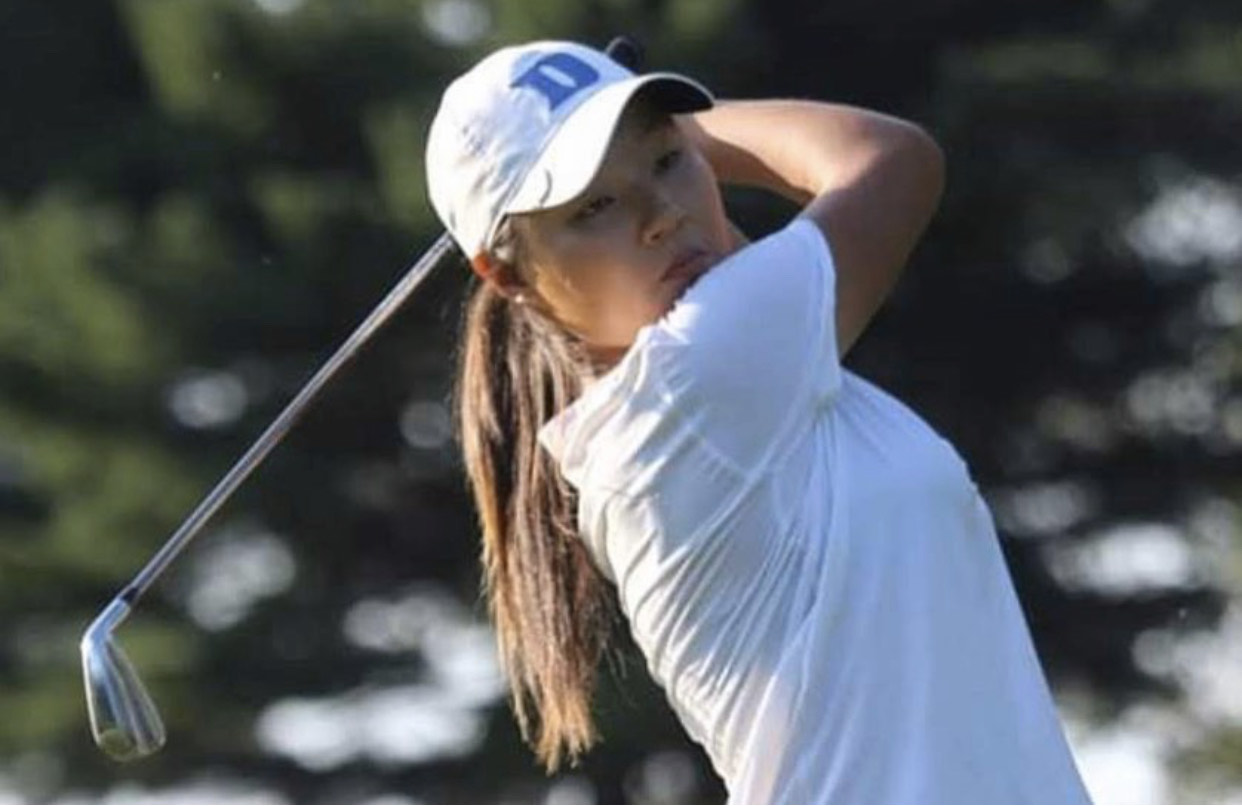 Bae swings her golf club during a tournament. (Sophia Bae)

Bae swings her golf club during a tournament.

The “Club” That Got Her into Duke

Senior Sophia Bae is taking her talents to Duke University.

It was a typical day at Norwood Public School and 8th grader Sophia Bae was roaming the halls. While the day may have seemed typical, the student was not. She was about to receive a call that would forever change the trajectory of her life.

Mere hours later, Bae picked up the phone. Duke University was calling, offering her the once in a lifetime opportunity to be a Duke Blue Devil—to compete at the highest collegiate level a student athlete can hope to achieve. Now a senior at NVOT, Bae knew where she would be attending college ever since she stepped into high school.

At a young age, Bae was very active, playing a variety of sports. She participated in basketball, tennis, and swimming, just to name a few, but over time she realized that golf was her passion. At the age of eight, she began to compete in tournaments all over the country, placing highly in many of them. With this newfound success, Bae ran with the sport, becoming one of the nation’s best, and was highly sought after by several collegiate golf programs.

Bae made an unofficial visit to Duke University during her final year in middle school. She said, “I immediately fell in love with the school, and I just knew I had to go there. Duke was the only school that I truly felt a connection with, so choosing Duke was very easy.”

As a high school freshman in the fall of 2017, Bae verbally committed to her dream school, where she would become a Blue Devil after high school.

However, all of this given success did come at a price. Her long hours of hard work and dedication often meant sacrifice—both physically and socially. Although she had already gotten into a top tier school, Bae still had to keep her body in pristine condition and continue competing in nationwide tournaments.

This extensive training and dedication has taken a toll on Bae, causing her to struggle with several injuries throughout her career. One of her most recent and major injuries was a herniated disc during the 2019-2020 golfing season, leaving her in rehab for the rest of the year. “I had to go through intense treatments. It still hasn’t healed completely, but it is much better now.”

Despite setbacks, Bae still needed to train all year long in order to take her training to the next level. She had only finished one academic quarter at NVOT as a freshman when she decided to move to Florida in order to continue training and school. “New Jersey normally gets very cold in the winters, so I had to resort to moving to Florida for better golfing opportunities.”

Following freshman year, she completed her sophomore and junior year in an online school in order to schedule her golf practice and school work appropriately. “Balancing golf and school can be very difficult sometimes. Most of the time spent outside of school would be practice and training, and I had little time during the day to actually complete school work.” This meant long, hard nights completing her homework and studying for tests.

All of the long training hours and irregular schooling had a profound impact on her social life since middle school. Bae missed out on special occasions like her middle school graduation and field trips that would allow her to spend time with friends outside of her intensive training. In high school, it became even harder for her to spend quality time with friends and family. Her friend Leah Han said, “She often had to prioritize golf over friends and events to focus on her practice and tournaments.”

Bae ultimately made the decision to return to NVOT to complete her senior year virtually. “I ended up transferring back to NVOT for my senior year, mostly because I wanted to be back home.” She still continues to train and rehab, along with handling the duties of a regular senior. “I am still balancing my practice schedule and school work, as I am still a student-athlete. I also stretch a lot and do a lot of non-golf related training.”

Now with only a couple of months until graduation, Bae is looking forward to the next chapter of her life.“I’m really looking forward to meeting new people at Duke. Being with other students at Duke will give me a fresh perspective.” In terms of her future career in golf, she continued,  “After school I would like to turn professional, but I just want to take things one at a time for now. I haven’t thought of any other careers, but like I said, I’ll take things one at a time.”

With her budding career as a Blue Devil on a rise, Bae’s goal is to simply stay “tee-rific!”