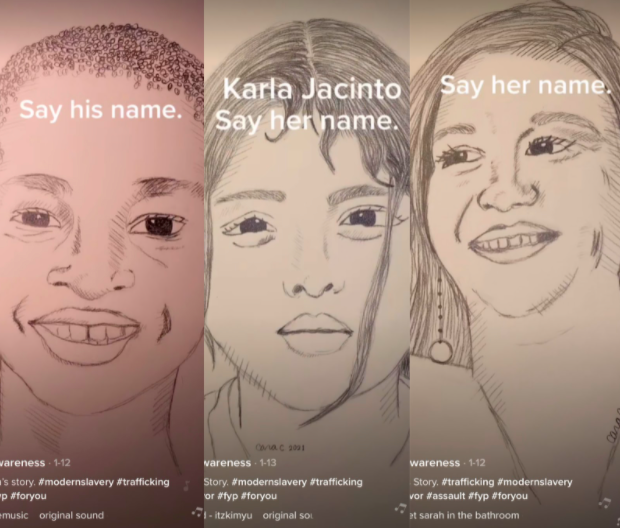 Making a Difference One TikTok at a Time

TikTok is not just for dances or funny videos anymore—the app has brought activism and social issues to the fingertips of thousands of users. One student who has taken advantage of this platform is junior Cara Chong. Her first video, posted on January 12, started as a history project. The account has now amassed over 3,000 followers and counting, over 250,000 total likes, and over 250,000 views on her most popular video.

Chong started her account (@artawareness) as a project for AP World History where she had to find a way to raise awareness about modern slavery. Like many of her classmates, Chong turned to social media, but she wanted her project to stand out. She says she uses her detailed artwork in each of her videos as “a more unique way to raise awareness,” and these images allow her to “retell the stories” of modern slavery victims. The realistic drawings of the victims’ faces gives “today’s society (especially teens) a way to realize and become aware of how slavery happened in the past and still happens to this day.”

AP World History teacher Cynthia Affinito believes it is very important for her students to know that while slavery is a part of history, there are “an estimated 40 million people in the world today that are living in bondage.” By having her students raise awareness about modern slavery, Affinito says that it allows them to see that “if they change one person’s life, they can change that person’s world. If enough people did this then collectively, we could really end this institution once and for all.”

When she heard about Chong’s account going viral, Affinito said she was very proud: “I hope that she sparked a new passion to continue the fight against modern-day slavery in those that she reached with her project.”

Chong believes it is especially important for today’s generation to be aware of modern slavery because it is an issue that tends to be “swept under the rug.” Chong thinks that Gen-Z has the ability to make a difference. She also points out that “this generation is the most targeted age group by predators.”

While her platform is relatively small, Chong is already seeing her account make a difference. Karla Jacinto, who is featured in one of Chong’s most popular videos, commented on her video, thanking Chong for shining light on her story. Chong says this was “pretty amazing because it showed how many people I have reached with my account.” Chong also acknowledged the “endless amount of support” she receives on each of her videos. It shows you don’t need a large following to reach others and raise awareness.

Chong pointed out that while she is using her small platform to spread awareness, many large creators are not doing the same. Creators with enormous platforms can spread awareness to millions of people, but many choose not to do so. The amount of social issues “other large influencers can raise are endless… they can easily influence, impact, change, and even solve some of these social issues for the future generations.”

Even though TikTok gives a voice to so many people, it isn’t perfect. Users’ For You pages are controlled by algorithms, so it is easier for large numbers of people to view certain videos. However, Chong says she has had to deal with the problem of shadowbanning on her account. “TikTok tends to shadow ban a lot of accounts that talk about social justice issues. This has happened to me personally but I don’t know why the app shadowbans certain accounts, especially social justice accounts.”

While Chong admires how the app allows people to share their thoughts on important issues, she points out that some people “post sources that are not credible, which leads to misunderstandings.” Chong uses credible sources such as freetheslaves.net and endslaverynow.org to ensure that she retells the victim’s stories properly.

There is no doubt that using TikTok can help make a change in our world, and permanently alter the way that we view political and social rights issues. As our generation becomes more aware of the issues happening in our world, our involvement is that much more important. As Chong states, “It’s up to Gen Z to make a change.”