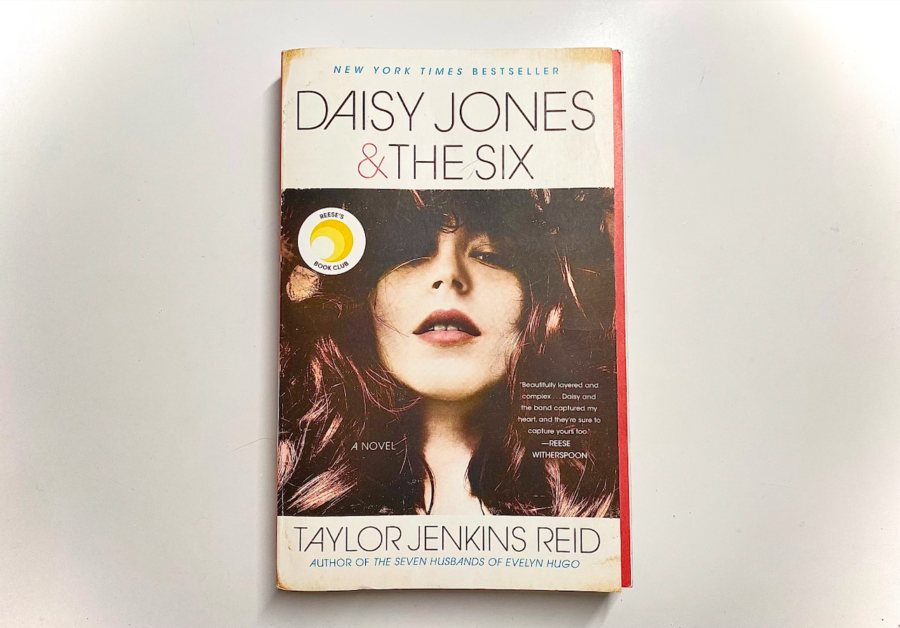 A book to keep you busy this summer.

It’s time to escape reality: With school coming to a close, now is the perfect time to let all your worries vanish, and worry about someone else’s. It’s finally time to binge read, and the perfect book to start with is Taylor Jenkins Reid’s Daisy Jones & The Six, a unique and riveting novel about a fictional band in the ‘70s who redefined music.

Styled as a mockumentary with an “unknown” interviewer who asks no questions, the story explores the several years the band spent together from when they were the Dunne Brothers to The Six and finally Daisy Jones & The Six. The documentary aims to tell the story of why they broke up after their last show on July 12, 1979. The centerpiece of the story is a complicated love triangle between lead singers Daisy Jones and Billy Dunne, and Billy’s wife, Camilla. Daisy and Billy’s similar experiences with drugs and alcohol draw them to each other, while Camilla stands on the sidelines, watching it unfold. The novel explores feminism, breaking the stereotypes of a male dominated era, addiction, passion, and gut-wrenching heartbreak.

This is easily one of my favorite books of all time. At first, I didn’t particularly like or understand the format. It felt confusing because I didn’t know how to visualize the story in my head, despite the author’s note at the beginning, which clarified that each section was part of an individual interview with each of the characters. But who was interviewing them? Where were the questions? Despite my curiosity, these questions became less important as the story progressed because I became so enthralled with the story. The interviews made it feel so much more personal and raw, and the way separate interviews overlapped especially blew me away.

It would have made sense for the female characters of this book to fall into the pit of male domination common in the 1970s, but feminist icons Karen, Camilla, and Daisy did no such thing. One of my favorite quotes from this book is when keyboardist Karen says, “Men think they deserve a sticker for treating women like people.” This sentiment is so relevant today—we give men so much credit for respecting women because it’s not expected from them, even though it should be a bare minimum. Daisy Jones wears what she wants, when she wants. She makes it explicitly clear that she is not responsible for the way men feel when they look at what she’s wearing. She doesn’t have to cover up or wear a bra just to make men feel more comfortable. It’s men’s responsibility to be decent people. This book ties in feminism, love, and commitment in a way that makes you fall in love with the world Reid has created and feel like you’re on tour with Daisy Jones & The Six.

Despite Daisy being a feminist icon that I absolutely adore, Reid has written characters so complex that I don’t even really like them as people. TJR so ingeniously makes me love and loathe her characters simultaneously. Billy, an arrogant control-freak, doesn’t care to include his band members in anything. Daisy is even more arrogant—she doesn’t think about how her impulsive actions affect others. She’s selfish and pretentious, but she’s also broken by drugs and addiction. The enigmatic Daisy drives a wedge between Billy and his wife, as Daisy and Billy’s problematic similarities kindle a magnetic connection. Despite their flaws, they share all the same struggles and passions. Daisy Jones and Billy Dunne may as well be soulmates, but they aren’t right for each other; They’re two halves, but the pieces don’t fit the right way.

Daisy Jones & The Six is the type of book that left me staring at a wall for hours after I finished to let the story soak in; It will undeniably keep you captivated for your first summer read.