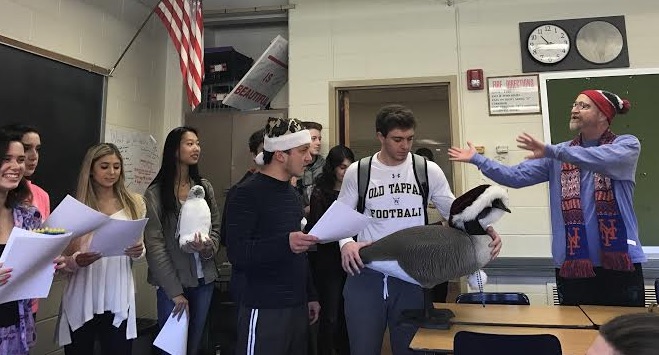 The creative writing class invaded the many classrooms of NVOT armed with their Christmas carols. On December 23th, the giggles of their Christmas carol parodies could be heard in each classroom they visited. Students set their “Bi-State carols” to the tunes of “Little Drummer Boy” and “Grandma Got Run Over by a Reindeer.” Cheered on by the journalism class and his classmates, a particular singer, senior Josh Goldstein sang his original parody of “Jingle Bells.”

However, not every song gets selected. “Some of them get cut,” Zelcer said. “That’s how rigorous is it.” Despite that, the Bi-State Singers marched throughout the school, singing their carols to anyone willing to listen.

Zelcer makes sure to bring out the creative side in all of his students, asking all of them to write a parody.   “All of the songs have to do with things that NVOT students can relate to,” said senior Monica Kim, “such as Mooyah, Starbucks, and freshmen walking slowly in the hallways.”