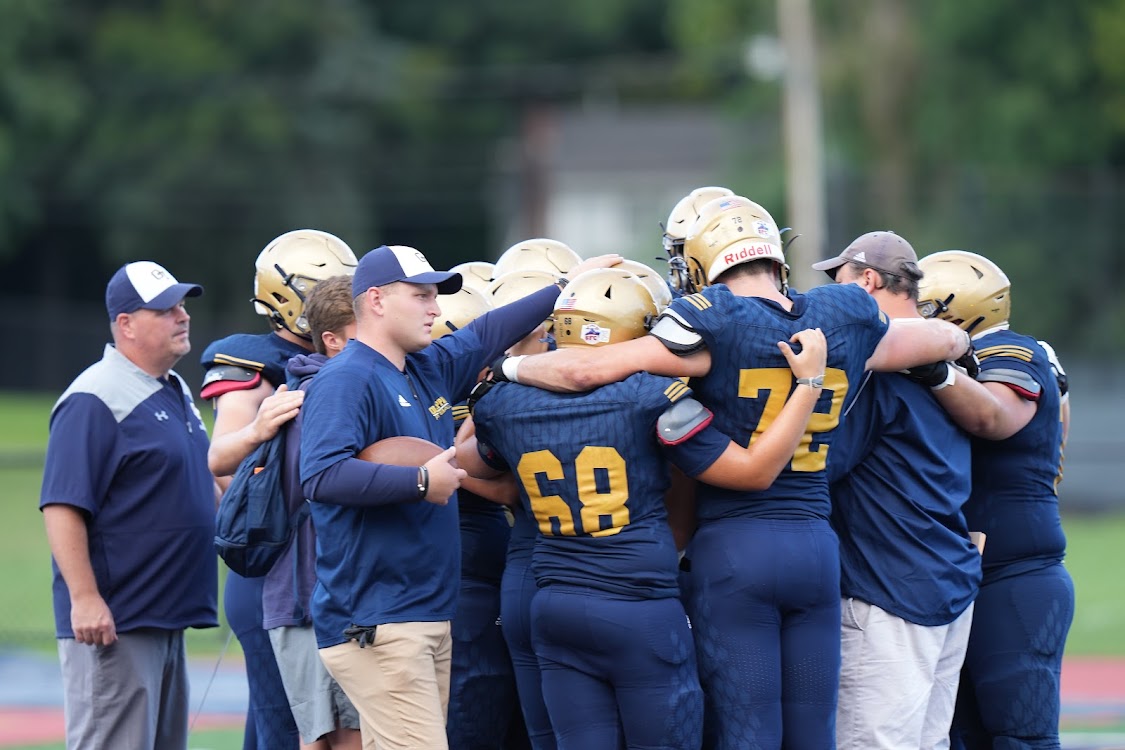 The team huddles before a game. (Evan Pinkus)

The team huddles before a game.

Brotherhood Beyond the Field

Family, honor, and tradition: the values that OT Football has carried for decades. But this year, the Golden Knights football team returned to their regular season in one of the most untraditional ways yet: to a sideline with barely any senior players. Ian Andresen, Charlie Amatrula, Will Foote, Daniel Rivera, Anthony Ramundo, and Jake Smith were the only six seniors returning to play this fall.

The seniors’ responsibilities play a key role in keeping the values of OT Football alive. “We have to show [the underclassmen] that there’s a way to play NVOT football and they need to carry that tradition on,” said Andresen.

This year’s football team has significantly fewer seniors in comparison to their usual average of sixteen. According to Rivera, that fact led the six seniors to step up and take a leadership role with their underclassman—more so than in past years.

Taking charge, the six boys took it upon themselves to mentor players, like sophomore Michael Miceli, one-on-one upon his return from a hip injury this summer. “I had missed a lot of practice,” said Miceli. “When I came back Charlie made a play book for me. The scheme we run here isn’t simple and I didn’t understand the plays for a long time. Ian helped explain them to me.”

Smith says that the lack of seniors “does not change the goal and expectations we have for this team.” The team already boasts three awards: Quarterback Amatrula and cornerback Andresen both won the North Jersey Sports Player of the Week for two consecutive weeks, and center Ramundo was named the Super Football Conference Man of the Year.

Although three players have already won awards, the boys are sure that they are far from done: Ramundo maintains that Smith, Foote, and Rivera “deserve a lot of credit too,” as “[they] are all the unsung guys that haven’t gotten their name called yet but they will.”

Since there are so few seniors on the team this year the presence of more underclassmen in the starting lineup was inevitable. The seniors have been mentoring underclassmen such as sophomores Evan Brooks and Miceli—the two starting cornerbacks—to carry on the OT football family traditions. According to Ramundo, “they [Brooks and Miceli] are stepping up big time by playing full defense.”

The boys credit their successes this season to their stronger team dynamic: “It starts with hanging out in the offseason,” said Ramundo. From pasta dinners every Thursday night in the North Cafe to team beach trips, the seniors have taken it upon themselves to get to know each and every one of their underclassmen.

“This team is the closest team that I have ever been a part of,” said Ramundo.

Their brotherhood extends far past the football field. Brooks feels this sense of family everywhere he goes: “I always feel like I’m with my brothers every time, whether it’s practice, film, games, Varsity House, or dinners.” It’s why he “can always trust my guys to do their job and to be accountable.”

The team moves on to the second round of playoffs tonight against West Morris Central High School at 7 p.m.