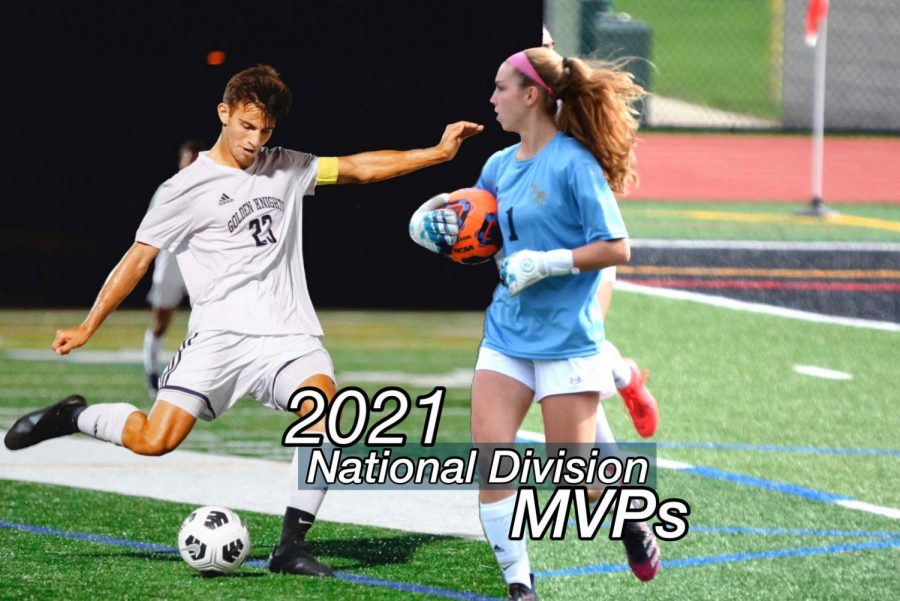 After making school history with both the boys and girls soccer teams winning league titles in the same year, two individual athletes on their respective teams were recognized for their efforts. Old Tappan finished out its clean sweep of the league when senior Max Caunedo and junior Mackenzie Ward claimed the MVP awards for both the boys and girls teams in the National Division.

Junior Mackenzie Ward served as the only goalkeeper for the girls program this past season, and her efforts in net allowed her to individually earn the 2021 Girls National Division MVP award. Ward’s commitment to the team was the most important aspect of her play; Ward said she felt a responsibility to “help keep [her] team in the game,” so she did “whatever it took to keep the ball out of the net.” Ward helped the team remain undefeated in divisional play, only giving up six goals in the ten games that the Golden Knights played. “It’s easy to perform when all you want to do is be the best player you can be for your teammates, coaches, and school,” she said.

The girls finished out their season with a record of 9-4-5, with the year officially coming to an end on November 5 in the quarter-final round of the New Jersey State Sectional Tournament. While her junior season has come to a close, Ward said that she looks forward to coming back next year for her final season: “We have something special, and I’m eager to see what else we can accomplish.”

For the boy’s program, senior Max Caunedo offered both consistency and leadership to the boys team. He served as one of the five captains for the Golden Knights and proved to be very versatile on the field. He started off the season playing center back, but as the boys suffered from a mid-season losing streak, struggling to generate opportunities up top, head coach Mark Torrie moved Caunedo to forward, hoping he could be the difference maker that the team needed. And he was. “I’m proud that me changing from defense to forward was a factor in [winning],” he said. Caunedo quickly adapted to the mid-season position switch, leading the team with eight goals and three assists.

Caunedo’s efforts earned him the 2021 Boys National Division MVP Award, which he said was “amazing to receive and be recognized by the other coaches.”  While the award itself was individual, Caunedo credits his team for the past season’s success: “It may seem individual, but in reality it was a team effort. From perennial starters to people who just gave it their all day in and day out, everyone was instrumental in our success, coach Torrie being first and foremost.”

While the boys team ended their 2021 season on November 1, finishing with a record of 9-6-1, Caunedo himself is far from done. In addition to being named the MVP of the boy’s National Division, he has also been selected as a First Team All-League player, and was named to the all-star team where he will represent the Golden Knights alongside the other top players in the county later this month (if the game is played). With his high school career wrapping up, Caunedo continues to look toward his future as he hopes to take his skills to a collegiate level.